The COVID-19 pandemic was the first of many impacts on the auto industry through 2021. Once production resumed after months-long shutdowns in 2020, various supply chain, shipping and components issues came to the front, pulling production down even as many markets still showed robust demand. Though 2020 and 2021 have been difficult and volatile, the situation should start to stabilize in the first quarter of 2022. Electric vehicle (EV) production is moving faster as more money is invested, with consumer preferences for utility vehicles influencing what types of EVs will be produced. Here we look at where IHS Markit sees production moving in the top three global regions: greater China, North America and Europe, through 2027.

The process of transforming of the automotive production footprint from internal combustion engine vehicles to zero-emissions EVs has begun and will be evidenced in increasing production of electric vehicles through 2027. Still, the machine that builds the machine takes time to build, including creating necessary battery plants as well as adjusting vehicle assembly. IHS Markit forecasts global EV production in 2027 at about 20 percent of total light-vehicle production. IHS Markit does expect that by 2030, on a global level, at least one in four-passenger cars sold will be an EV and in the longer term, full-scale transformation is now inevitable. Through 2027, however, automotive production continues to be dominated by vehicles with internal combustion engines.

During the early stages of the pandemic, with related restrictions on economic and manufacturing activity, the greater China region was essentially first in and first out. Production was both halted and resumed earlier in 2020 in the region than other markets, leading to earlier return of sales demand strong enough to reverse two pre-pandemic years of sliding sales and production. In 2020, production in the greater China region dropped just 4.4 percent compared to 2019, while global production dropped 16.2 percent. In 2021, IHS Markit forecasts regional production of about 24.8 million units, a 5.2 percent increase over 2020. It could be 2024 before greater China sees production exceed the previous 28-million-unit level, last seen in 2017. 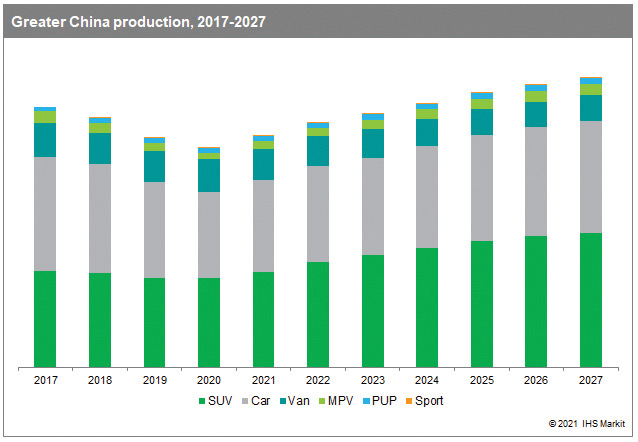 China is already the largest production region for EVs, and also will see significant production growth over the next six years. Though vehicles with internal combustion engines (ICE), including various hybrids, will make up nearly 75 percent of production in 2027 in greater China, change is taking root. In 2017, the regional production of EVs accounted for a modest 2.0 percent of total output. In 2021, it is forecast to reach 7.8 percent, on the way to 25.6 percent in 2027. Though China is shifting to a market where production of SUVs is outpacing car production, in the EV subset, SUVs have only a small edge. IHS Markit forecasts production of electric cars and electric utility vehicles combined will make up 93 percent of China’s EV production in 2027, compared with cars and SUVs accounting for only 85 percent when including both EV and ICE. The higher proportion of cars and SUVs in EV production reflects that new EVs are moving into popular segments in the near term; though vans and MPVs are a more significant sector for China overall, EVs in those segments will come later. Greater China production of EVs is forecast to grow from just under 552,000 units in 2017 to 7.97 million in 2027. 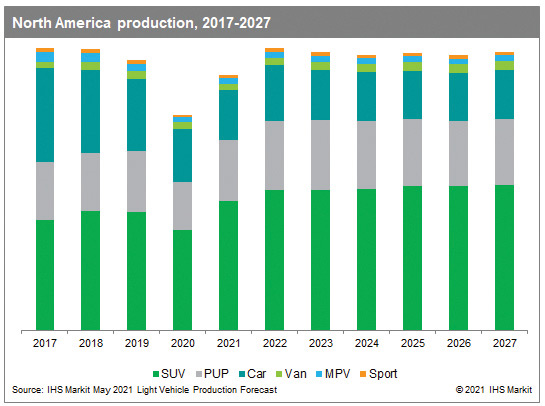 In North America, production fell 20.2 percent year over year in 2020 on the COVID-19 lockdowns. IHS Markit forecasts production up 18 percent year over year in 2021 and 10 percent in 2022 based on May 2021 forecast. Though in mid-2020 expectations were that the pandemic-related recession could severely dampen demand, U.S. auto consumers have been resilient and continue to buy—and today inventory is lower than demand. The weak inventory levels, a problem this market has rarely had, are a result of the shutdowns in 2020 and a subsequent wave of component and supply chain challenges, including the ongoing global microchip shortage. Not all volume can be recovered and it will be into 2022 before automakers can start to catch up on what can be done, though output should start seeing more normal cadences by the end of 2021. North American output will recover to pre-pandemic production relatively quickly, given the environment. In 2018, North American production was just under 17.0 million units; this had dropped to 16.3 million units in 2019, as U.S. market sales plateaued. The pandemic pulled 2020 output to 13.0 million units, and in 2021 it should reach about 15.4 million units. In 2022, automakers will work to rebuild inventory, and output is forecast to temporarily reach 17.0 million units. From 2023 through 2027, North American light-vehicle output is forecast to normalize between 16.6 and 16.8 million units.

Tying the two threads together, opportunity for EV growth in North America can be found in the addition of EVs in more popular consumer segments, which for North America means utility vehicles and pickups. IHS Markit forecasts that within EV production, in 2027, 63 percent will be SUVs and only about 12 percent will be cars. Though pickups are growing in share for North America, the full-size pickup segment is the largest and EV pickup adoption is forecast to be somewhat slower. In 2027, IHS Markit forecasts that about 14.5 percent of EV production will be pickup trucks. 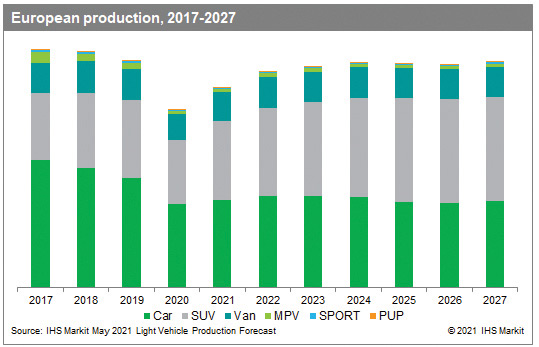 Europe is more aggressive than China in aiming for a transition to EVs. In 2017, EV production in Europe was lower as a share of regional output than in China or North America. Only 0.6 percent of vehicles produced in Europe were EVs in 2017; by 2027, this is forecast to grow to nearly 30 percent. Europe is also moving more quickly toward HEV production, which in 2027 is forecast to reach 47 percent. While Europe will continue to see about 70 percent of light vehicles produced still have an ICE, only about 23 percent will be traditional ICE propulsion system (including stop-start). The shift in Europe is directly related to policies pushing faster and more aggressively for change.

Looking at the types of vehicles sold in Europe, the region is also seeing a rise in utility vehicles, though slower than North America or greater China. In 2017, 53.6 percent of total European production was cars and 27.8 percent SUVs. As soon as 2019, the mix changed enough to bring cars to less than half of Europe’s total production. By 2027, only about 38 percent of Europe’s production is forecast to be cars; SUV output is forecast to reach 46 percent. Vans are also a significant segment for Europe, and partly holding SUVs back from exceeding 50 percent of production. However, when it comes to EVs, the nod is forecast to go to SUVs. In 2027, IHS Markit forecasts that 51 percent of Europe’s EV production will be SUVs, versus 40 percent cars and under 7 percent vans. Though vans remain significant in the region for business and delivery, there is expectation the vehicle type will continue to rely more heavily on ICE or hybrid solutions in the near term.

Outlook: Moving Back to the Pre-Pandemic Course

Throughout the pandemic, the auto industry has largely shown resilience. Production, sales and profits fell and there has been an impact on financial results, but most automakers and suppliers were able to work through using various cost containment methods as well as strong supply chain management and benefitting from better pricing on sales as inventory remains constrained. Going forward, we expect the broader global policy discussions on electrification are pushing accelerated development and investment. Consumer adoption of EVs is being encouraged through government incentives, but also through automakers investing into segments customers want to be in. The auto industry, like other parts of the economy and society, saw a setback throughout the COVID-19 pandemic, but appears to be moving back to a pre-pandemic course.