The competition for aerospace production work among U.S. states and regions is intensifying for a simple reason: The outlook for the aircraft industry is now the best it has been for decades. Topline output continues at near-record levels. Key segments look set for growth through the next three years, at least. There are areas of concern, and not all manufacturers will benefit equally. But overall the industry is in excellent shape.

However, the industry has been stuck on this plateau not for market reasons but rather for reasons relating to production ramp difficulties with new key programs. Single-aisle jetliners represent 25% of the value of this industry, and difficulties in transitioning between the last generation and the next generation have resulted in the present level of stalled output. The F-35 Joint Strike Fighter’s slow production ramp has contributed to this problem.

But these numbers represent only the value of deliveries; they exclude the broader footprint of the industry, which is about two to three times as large as the value of total new build aircraft. The numbers also exclude research and development funding, and the generally more lucrative aftermarket sustainment business. 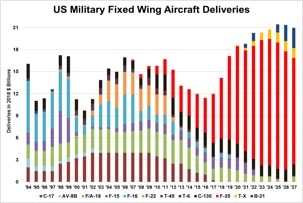 Therefore, since the new aircraft market is worth $180-$210 billion per year, we reckon that the total aircraft industry contributes $700-900 billion annually to the world economy (that covers the broader industry footprint plus research and sustainment). And this figure excludes numerous related industries, such as airlines, air traffic control and military air base support services.

As the chart on the previous page indicates, for the past 15 years, topline deliveries growth has come primarily from the civil markets, with a 3.7% compound annual growth rate (CAGR) by value. Military markets have grown at a 2% pace, but higher defense budgets will grow this growth rate in the coming few years.

U.S. primes’ share of this industry has remained relatively steady at just above 50% by value of deliveries for the last two decades. As the industry topline has grown, so has U.S. output. Overall, U.S. industry continues to do very well at the subcontractor level, exceeding the 50% mark in most key segments (engines, avionics, etc.) and equaling the 50% level in others (aerostructures, control systems, etc.).

The primary drivers of U.S. industry at the prime level include Boeing jetliners and fighters, Lockheed Martin fighters, Gulfstream business jets, and rotorcraft from all three primes (Boeing, Textron/Bell, and Lockheed Martin/Sikorsky). Many other smaller manufacturers play a supporting role.

Given the relatively steady nature of this industry, where there are few major disruptions and product life cycles are measured in decades, it isn’t surprising that the aerospace trade surplus in the U.S. is relatively steady. As the chart above indicates, the U.S. has for decades enjoyed a roughly 2.5-1 aerospace trade advantage by value with the rest of the world. This higher ratio of recorded exports (compared with 1-1 output at the prime level) reflects U.S. industry’s success at the subcontractor level, along with success in space systems, missiles and in other markets.

The world aircraft industry today is increasingly controlled by Airbus and Boeing.

First, large commercial jets are now about 60% of total industry output by value, not just at the final delivery level but also through most of the component and structures supply chain.
Second, Airbus and Boeing dominate because they are absorbing a greater share of the industry. The acquisition of Bombardier’s CSeries–to be completed in the middle of 2018–gives Airbus a new line of 110/130-seat jets, provisionally known as the A210 and A230. Meanwhile, Embraer and Boeing are moving toward creating a joint venture–to be controlled by Boeing–covering Embraer’s E-Jet series, spanning 75-120 seats.

Therefore, in a year, the entire jet transport industry will be controlled by just two companies. And barriers to entry remain extremely high, as evidenced by China’s multi-decade effort to break into the market, with few signs of success. Russia is trying to re-enter this industry, but aside from one money-losing regional jet it also faces a long and difficult road.

This industry is not just protected by high entry barriers; it also features extreme concentration at the top, in terms of major revenue-producers. Just a small number of jetliner models play a pivotal role in driving the market. Historically, the two major single aisle programs–Airbus’s A320 series and Boeing’s 737 family–constitute 25% of industry revenue.

Of the top five programs (which represent half the aircraft industry in revenue) just one, Lockheed Martin’s F-35 Joint Strike Fighter, is not a jetliner. Jetliners comprise eight of the top 10 aviation manufacturing programs.

Today, the jetliner market is extremely strong. In fact, some are questioning whether the market has moved beyond cyclicality.

Since the jet age began, the market has seen a recurring pattern of roughly seven good years followed by three bad years, with deliveries in the bad years falling by 30-40%, or more, by value. Yet since 2004, the industry has enjoyed strong growth, with the exception of the 2016-2017 hiatus (due largely to the single-aisle deliveries pause before A320neo and 737MAX deliveries ramp up).

With the exception of a few sluggish twin aisle programs, OEM plans call for continued growth through 2020, at least. The A320 family is on course for 60 planes per month, with the 737 headed for 57 per month. Boeing plans to raise 787 output from 12 per month to 14 per month in 2019.

If the current rumors are correct and Airbus and Boeing both go to 70 single aisles per month by 2023, the single-aisle segment would have seen 450% growth (by value of deliveries) over 19 years, in constant year dollars. More single-aisle jets will have been delivered between 2010 and 2024 than were delivered in the first 51 years of the jet age, 1958-2009.

With over 12,000 jetliners on backlog at Airbus and Boeing alone, this momentum will continue through the end of the decade, largely due to those two new single aisle models. These single aisles represent 50% of industry output by value.

This means the jetliner market will have a 16-year growth cycle and possibly longer. That’s over twice as long as the usual seven-year boom, and this time, hopefully, we won’t see an unpleasant bust cycle on the other side. The current Airbus and Boeing jetliner deliveries plan, and its relationship to the history of the market, is illustrated in the chart above.

There have been three drivers behind this remarkable boom since 2004, and all of them are in very good shape.

One is the remarkable rise of China, both as an economy and as a jetliner market. In 2001, China accounted for just 3% of world jetliner output, scarcely higher than in 1991. By 2015, this had hit a record of 22%, making China the largest jetliner market in the world. In 2017 it reached 22.8%. This excludes leased jets delivered to China that year. And China’s banks and lessors played an even larger role in world jetliner finance.

Two other key exogenous factors impacting jet demand are the price of fuel and the cost of capital. But it’s the ratio between those two indicators that helps drive jetliner market health.

As of this writing, fuel is just above what might be termed the Goldilocks zone, $71/bbl for West Texas Intermediate. If fuel goes down, to $40 or below, airlines will be far less likely to re-equip with new, more efficient jets, and more likely to keep older equipment longer. If fuel goes up, to $80 or above, airlines will have a harder time making money, and as they raise fares to compensate travel demand will likely fall. But today’s fuel prices are reasonably healthy for the industry.

Meanwhile, cash is still very cheap. The Federal Funds Effective Rate is just 1.5%, up from an extended period at around 0%. This is forecasted to get to 2.1% this year but, considering that as recently as 2007 it was 5%, interest rates are still reasonably low.

The ratio between the cost of money and the cost of fuel plays a big role in airline thinking. A combination of 0% interest and $100 fuel effectively means that an airline should absolutely finance new jet purchases to replace older, less efficient jets. Today’s ratio is still pretty good. By historical standards, there’s still a gap between these two metrics, even if it’s far less profound than in 2009-2014. But 5% interest rates and $40 fuel would mean a lot of airlines simply hang on to older equipment.

Over the past two years, a third factor driving jetliner demand has kicked in. Airline traffic demand has been unusually strong. Revenue Passenger Kilometers (RPKs) grew 7.6% in 2017, well above the 5.5% average rate of the last 10 years, according to the International Air Transport Association (IATA). Even the long-depressed air cargo market is back; Freight Ton Kilometers (FTKs) grew by 9% last year, the strongest number since the 2010 recovery. Airline industry profits have been strong, too, with $35.6 billion in 2016, and IATA now forecasting $31.4 billion in 2017.

This traffic growth (and industry health) far exceeds the pace of world economic growth. There’s a long-established link between GDP and traffic, and traffic is now outperforming the usual GDP multipliers by a healthy margin. It’s hard to say whether this will continue, but even if RPK growth falls to 2016’s 6.3% level, that’s sufficient to keep jetliner demand strong.

While traffic is outperforming economic growth, the latter is also quite strong. The U.S. economy has now been expanding for nine straight years, with no signs of a slowdown. The IMF and OECD are both forecasting global growth of 3.9% this year, up from 3.7% in 2017. All the major regions of the world are enjoying this growth, and China, again the biggest single market for jetliners, is still growing at around 6.5%.

There are many things that could go wrong. In addition to a decline in passenger traffic and economic growth, a trade war with China or a slowdown in China’s economy, and changes to the fuel prices/interest rates ratio, there’s always the risk of an exogenous shock, such as a war or a terror attack. But our baseline scenario calls for growth through 2020. At that point, jetliner industry output, in real dollars, will be worth three times the level in 2004, when this super-cycle began.

The jetliner industry’s remarkable growth is accompanied by a strong military aircraft market. However, the U.S. part of this market is increasingly dominated by the F-35. Also, there are even fewer new product launches in the military market than there are in the civil markets.
Despite its current good fortunes, Boeing faces a few challenges in the future. The military market outlook described above is clearly not in its favor. It’s one of the biggest curiosities that the world’s largest military aviation program is a U.S. program, but the biggest aerospace company in the U.S. is one of the very few companies in the world without any kind of role in that program (the F-35). Northrop Grumman has won the B-21 bomber contract. While the T-X trainer is still up for grabs, there are three competitors, and even if Boeing wins it would not provide much growth.

Also, even the current remarkable jetliner market will run out of growth in the next few years. Clearly, if Boeing wants to keep growing its revenue and profits, it will need to try new approaches. This explains why the company has established a separate aftermarket division, to pursue sustainment opportunities. It also explains why the company is establishing new capabilities in propulsion, actuation and avionics, to pursue vertical integration opportunities.

But a third approach will be to look at where the company is weakest against Airbus, and to see what can be done to regain lost market share in that segment. The New Midsize Airplane (NMA) is a response to that middle-market weakness.