Despite the industry’s growth and prosperity, the number of aircraft industry players remains relatively constant. While the industrial consolidation of the last two decades has ceased, there are few signs of significant new market players. A very broad range of factors is responsible for this stasis.

It’s very easy for manufacturers in this business to fail. It’s also quite easy for them to see the attraction of merging or being absorbed by larger players. Being part of a larger company gives a manufacturer financial critical mass, essential to survive industry downturns and to develop a broader range of new products and bring them to market at a faster pace. It allows companies to pursue a greater range of markets, avoiding dependence on any one or two core pursuits. It gives them greater leverage when negotiating for raw materials, an increasingly expensive part of high-tech manufacturing. 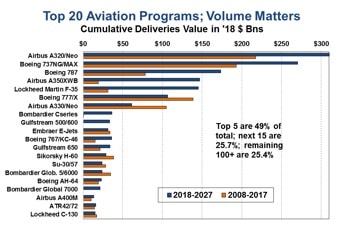 Before the current Airbus/Boeing duopoly, the jetliner business included McDonnell Douglas, Lockheed and numerous earlier players, such as Convair. Ultimately, the smaller participants saw the advantage in being part of something larger, or of exiting the market.

The regional aircraft market provides a more extreme example of these trends. Looking back 10 years, there were eight manufacturers. Only three of these survive today. This market grew at a healthy pace in the 1990s, yet pricing stayed quite soft. Of the others, BAE Systems and Saab decided to exit the market. In fact, BAE completely exited the civil aircraft business when it sold its business jet unit and its 20% share in Airbus. Beech/Raytheon (now Hawker Beechcraft) exited and focused on business jets. Fairchild Dornier and Fokker went bankrupt. The first of these ceased to exist in any form.

Despite this collapse in regional market participants, three new players are seeking to enter the market. Russia’s United Aircraft Corp. wants to build its SuperJet. China’s AVIC/COMAC wants to build its ARJ21 and C919. Japan’s Mitsubishi wants to build its MRJ. But even these relatively established aircraft industry manufacturers face an uphill battle breaking into a new market. All three want to build a 70/90-seat regional jet, just as the market for jets in this class has hit a plateau.

This situation isn’t very different from the 1980s and 1990s, when numerous players tried to break into the turboprop market, which seemed to offer boundless, long-term growth before it collapsed in the mid-1990s. In addition to the players mentioned above, other companies, such as Indonesia’s IPTN and Spain’s CASA, tried and failed to break into the regional turboprop business.

Due to manufacturer consolidation and market exits, the aircraft industry is notably concentrated. The top nine companies—Boeing, Airbus, Lockheed Martin, Bombardier, Leonardo, Dassault, Embraer, Textron (Cessna and Bell Helicopter) and General Dynamics’ Gulfstream unit—account for 90% of industry revenues. Most of these players have absorbed several smaller players in past decades, increasing their shares of a growing market.

Yet this market share growth and industry consolidation is somewhat deceptive. Although prime contractors have increased their dominance at the top end, they are also increasing the amount of work they give away through outsourcing. Manufacturers have always outsourced 50-60% of the value of any given aircraft (engines, avionics, systems, interiors, etc.). But today, primes partner with first-tier companies for major airframe structures. The primes seek to spread new program risk and costs, and focus on top-end product integration and marketing. Boeing’s 787 is the best example of this trend, although the program’s endless delays imply that Boeing went much too far in outsourcing the design work (but manufacturing outsourcing still looks like a good idea).

Due to this outsourcing, the industry has seen the growing power of subcontract players specializing in aircraft structures. The structures industry too is relatively concentrated. The major second-tier companies include Spirit AeroSystems, Vought Aircraft, Finmeccanica and Japan’s Mitsubishi, Kawasaki, and Fuji Heavy Industries. These important manufacturers are sited in high-cost production areas, implying barriers to entry that are just as high as in the prime contractor arena.

Harry Stonecipher, ex-CEO of McDonnell Douglas, once famously remarked of the jetliner business, “If we weren’t in this industry, we’d be trying to get into it.” This was basically a pipedream, as evidenced by McDonnell Douglas’s subsequent exit from that market (and the entire company’s absorption into Boeing). In fact, between 1960 and 2016, only one all-new company—Embraer— succeeded in entering the market for jet-powered aircraft.

The military side of the industry is even tougher on newcomers than the civil side. There have basically been no new military aircraft market entrants in many decades. The growing unmanned aerial vehicle (UAV) market has attracted a few new players, especially General Atomics with its Predator series, but there are few hopes for manned aircraft market entrants.

The reason for these high entrance barriers is simple. If a need for critical mass favors consolidation, companies that have achieved that critical mass have the power to crush start-up companies, even if the new players offer a superior product. For example, any new start business jet player must contend with the likes of Cessna, a company with an enormous and loyal customer base, deep pockets and a very extensive product sales and support network. The new company not only needs to develop a design and start producing it. The costs of selling and supporting the new plane can exceed those design and tooling costs.

Another problem concerns volume. Many export-driven economies, particularly in Asia, thrive on enormous production volumes of televisions, DVD players, cars, and car components. They use these volumes to move up the production learning curve, increasing quality, lowering manufacturing costs, and quickly repaying up-front expenses. The aircraft industry offers no such volumes. In fact, fewer than 5,000 turbine-powered aircraft were produced in the world in 2017, including helicopters and light turboprops. Airbus’s A320 series maintained its status as highest volume aircraft program, with 538 deliveries.

Government decision making is another obstacle. Governments can provide seed money for new market entrants. But they aren’t very good at selecting appropriate segments, products, or strategies. In the mid-1990s, several governments began planning national prop planes. That market collapsed, and some began planning 30/50-seat RJs. When those collapsed, several of these governments began looking at larger RJs. Today, China, Japan, and Russia are all funding larger RJs—just as that market is plateauing and props are growing again.

For the future, there is one exception to both of these problems. Honda Corp. is seeking to manufacture its HondaJet, a light business jet. A prototype aircraft flew in 2003. It features an over-wing configuration for its two Honda engines. It entered service in 2016—six years late—and is built at a new facility in North Carolina.

Honda, of course, has very deep pockets and considerable production experience. If its new jet finds a receptive market, the company could spend billions developing a worldwide support network and additional products. Or, it could decide that the money is better spent on a market it understands: cars.

It will be interesting to follow HondaJet’s fortunes. If it fails to find more than a niche market, it will be a clear lesson that new market entrants are basically doomed, no matter what financial advantages they enjoy.

The reason for KAI’s success in entering the market is extremely simple—government funding created it, and maintains it as an ongoing enterprise. KAI’s business future depends on the Korean Government’s continued willingness to fund it, and the occasional export sale as a modest enhancement to national defense work. It does not need to worry about commercial aircraft marketing and support, or about up-front new product development expenses. KAI’s international presence has also been helped by Lockheed Martin.

The lesson of KAI, therefore, is to obtain enormous amounts of government money. This is a difficult prospect. Defense self-sufficiency has been proven to be illusory, with even medium powers like Israel and Japan abandoning hope of meeting national needs with indigenous products. And in a time of economic reform and free enterprise predominance, government industrial policies that favor new civil aircraft companies are almost non-existent.

The other two new entrants have no government funding advantage and have suffered for it.
The second new entrant was Sino-Swearingen, with its SJ30 light business jet. The first of these was delivered in late 2006. This development followed well over 20 years of slow, frequently confounded development efforts. There were only a few deliveries and the program is dead again.

The third new entrant is Eclipse Aviation, manufacturer of the Eclipse 500 very light jet. This company also achieved its first delivery in late 2006. By December 2007 Eclipse had delivered about 68 planes to customers. However, the company’s admitted breakeven point was 600 jets per year, a virtual impossibility. The company went bankrupt in October 2008. A restructured Eclipse, now owned by One Aviation, has tentatively begun deliveries at a very low level. If it succeeds as an ongoing business, it will only be with the massive help of a larger company.

In all, the aircraft industry stands in stark contrast to its cousin, the airline industry.

The airline business has been very tough to exit, due to political interference and lenient bankruptcy regulations. It’s also easy to enter, thanks to plentiful manufacturer finance for new planes, a surplus of easily obtained used planes and a broad variety of unexplored service niches.

The aviation manufacturing industry suffers from the exact opposite situation, and despite today’s good market conditions, there are few signs of change.