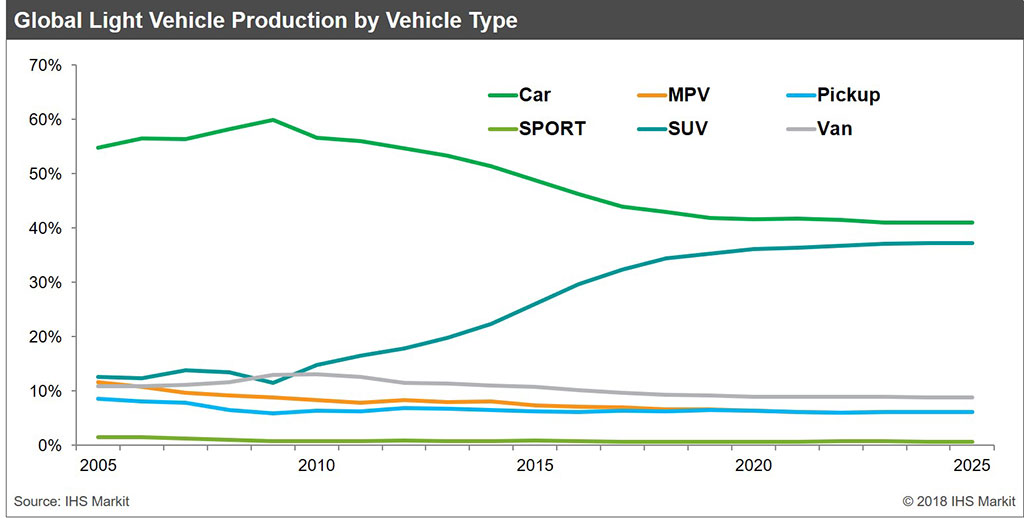 On a global stage, IHS Markit forecasts that several regions will see growth in light vehicle manufacturing in 2018, with worldwide production estimated at 95.11 million vehicles.

In 2025, IHS Markit forecasts this will increase to 109.65 million vehicles. However, this increase in global volume is not expected to be evenly distributed. The 14.5 million unit growth during this period will largely come from production in Greater China and South Asia, forecast to see annual production grow by 5.7 million and 5.1 million units, respectively.

Europe and South America are both forecast to see production output grow by 1.8 million units. By 2025, however, IHS Markit forecasts North America output to increase by only about 300,000 units. The region will maintain position as third-largest, though also forecast to lose global share through 2025. By then, North America is expected to contribute just under 16% of global volume, compared with about 18% in 2017. Europe will also lose share, dropping from about 23% of global production volume in 2017 to just under 22% in 2025, as South Asia and China see increases in production. 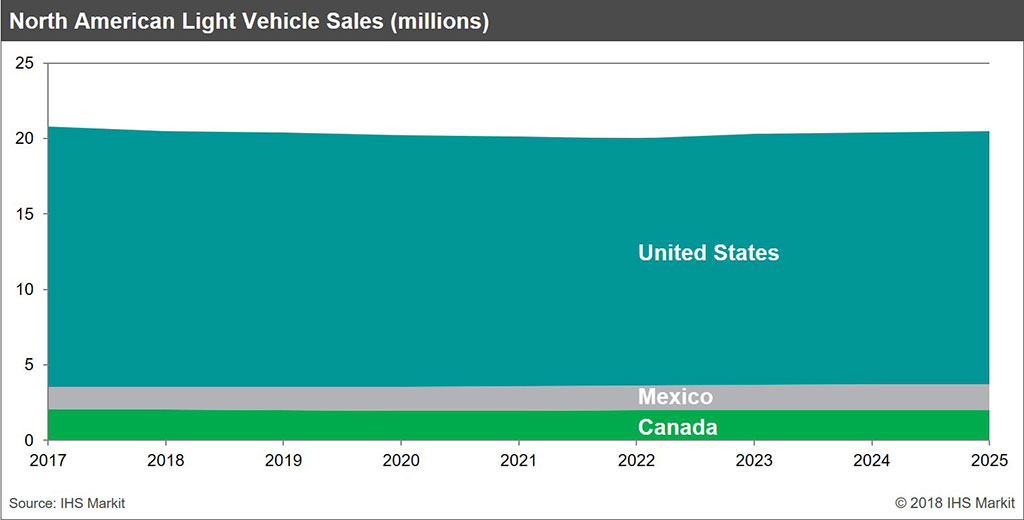 The 2017 decline largely resulted from automakers continuing to work to address production mix issues, as consumers increasingly shift from cars to utility vehicles (xUV), whether crossover utilities or sport utilities. There is also a greater focus in the industry on maintaining profitability, as compared with the period ahead of the 2008–2009 recession. OEMs are working to reduce less-profitable rental fleet activity as well as manage incentive activities—while also keeping inventory in check and pulling back on production. This is in contrast to a period when automakers dealt with weaker demand by pushing incentives and fleet sales up to keep the plants operating. However, moving forward, the North American region is seeing vehicle redesigns and localization of production from foreign automakers as a source for a stable outlook, with some growth.

In the longer term, there are headwinds to North American production. Light vehicle sales for the region are forecast to remain relatively stable, around 20 million units per year. However, the US market, which is the driver for the region, is forecast to see sales nearer the mid-16-million unit mark. While this demand is robust, the US market is stabilizing, with minimal growth expected from Canada or Mexico.

Another factor will be automakers shifting some production to China, particularly for cars which are under pricing pressure and seeing reduced demand in the US. GM, Ford, FCA and BMW will account for more than 90% of this activity. Examples include Ford’s decision to shift production of the next-generation Focus to China and GM’s decision to import the Buick Envision, an addition to the Buick lineup, rather than build it both in China and North America. The plant which currently builds the Focus is shifting to trucks and SUVs (Ranger and Bronco), but Ford also canceled a plan for building a new plant in Mexico to support Focus. Instead, the company believes that the weakening demand for compact cars in the US can be met with production from its plant in China. 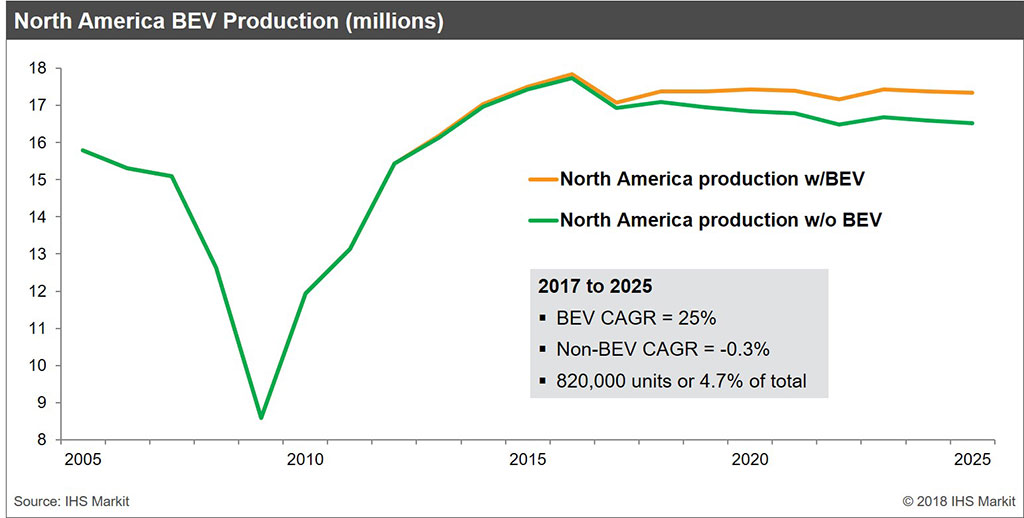 Also affecting the forward forecast for North American production is the expectation that OEMs will continue discontinuing some car nameplates. Nameplate proliferation continues as new battery electric vehicles (BEVs) are added, but the new products will have lower volume than comparable non-electrified models. In the US in particular, there is a risk that the industry is moving toward a situation of excess capacity. At this point, however, this shift is a balancing act for companies with a global footprint. The intent is not specifically to move automotive production from the US to China, but for each automaker to ensure its global manufacturing footprint is being used as efficiently as possible.

There are several reasons for the shift in production to China. As noted, automakers are looking at their production bases from a holistic view, to prioritize capacity and profitability. In addition, for most OEMs, the volume needs for that market are high enough to justify a plant. The shift captures vehicles which had been multi-sourced, but for a variety of reasons will shift to single sourcing from China, or are completely new to the market. For automakers with robust enough production in China to meet quality expectations of US and European customers, the move can reduce tooling costs versus multi-sourcing as well as ensure that its plants are closer to optimal capacity utilization.

There is also incentive to build vehicles to be sold in the China market in China, in the form of the 25% import tariff that country enforces and the aforementioned market demand. Additionally, relative to North American production, increasing competition and price competiveness contribute to profitability concerns on B-segment and C-segment vehicles. There is also, for several, a situation where there is available capacity in newer Chinese plants, as that market is growing at a slower pace than in prior years.

In the example of GM choosing to import the Envision, the company sold about 207,000 Envisions in China and about 41,000 in the US in 2017. The Chinese production facility has the capacity to easily handle this output, and with the lower volume in the US, multi-sourcing would drive up costs on the vehicle. In both the Ford Focus and Buick Envision examples, neither company reduces existing North American output to make the shift. Ford did cancel new investment into its North American footprint, but the plant building the Focus shifts to more profitable truck and xUV output. In the long term, IHS Markit expects increased risk for shifting sourcing from North America to China from GM, Ford, FCA and BMW.

IHS Markit expects automakers to choose one of three platform approaches for the propulsion shift to BEVs. Automakers are either developing these vehicles from standard platforms already available, developing new multi-energy platforms or developing a dedicated BEV platform. There are pros and cons of each approach.

One option is integrating batteries into a standard platform, without changing the overall architecture to form a battery-driven vehicle assembly. This option has the benefit of shared costs for much of the vehicle architecture, but also can become quite costly related to retrofitting and is not optimized to benefit from scale and efficiencies which might be possible through a dedicated BEV platform. Examples of this would include vehicles like the Honda Fit EV, Fiat 500EV and Ford Fusion Energi PHEV.

Another is to develop a new multi-energy platform intended to support a battery electric or a conventional powertrain. This would not be the skateboard-style approach of a dedicated BEV, which would be a path toward optimizing for space and performance, but would be more flexible than a standard platform. Examples of this approach would include the BMW i3 and BMW i8. Moving this direction hedges some of the risk and enables higher volume. However, it also incurs higher development costs and drastically increases complexity of manufacturing and assembly.

A third option is going with a dedicated platform; so far, these have largely been the skateboard-style. This approach keeps the heavy battery lower in the vehicle, allowing for more battery capacity and interior space in the same vehicle size, as well as improving driving dynamics somewhat on a lower center of gravity. With this solution, there can be lower costs in parts and manufacturing on the lack of a conventional engine, and improved flexibility on the types of vehicles the platform can be used for. However, volume is not necessarily high enough to support scale and profitability is not assured.

Production of xUVs is forecast to increase in nearly all regions as consumer preferences for these vehicles are expected to continue to grow and automakers work to adjust. The situation will be exacerbated as automakers also begin to pull back on traditional car model lines over time, and increase efforts to participate in xUV sales by adding more nameplates and filling in any gaps. 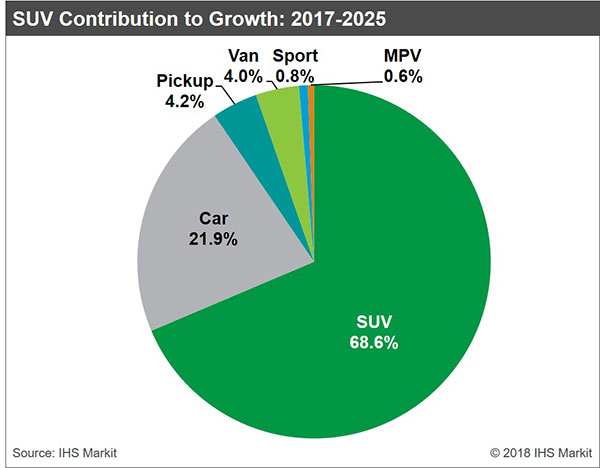 IHS Markit forecasts that production of xUVs will increase by about 9.9 million units between 2017 and 2025. In North America, production output of xUVs in 2025 will increase by 1.1 million compared with 2016. xUV growth is expected in all segments and at all price points, though luxury brands have seen faster growth and provide the potential for premium manufacturers to see further growth and a profitability benefit. In the mainstream segments—where xUVs became an important part of the market faster than in premium segments—there remains growth in small and midsize segments. However, there is potential for a volume trap as the segments become increasingly crowded and pressure on pricing comes to the forefront.

As xUVs have proliferated, IHS Markit forecasts predict further development of lower-volume segments. Rugged xUVs with a traditional, boxy design and greater and more authentic off-road capability are seeing a resurgence in interest, with efforts including the latest generation Jeep Wrangler, upcoming Ford Bronco and international efforts like the Nissan Terra. Sport-oriented xUVs are also showing increased proliferation. This category includes vehicles which sacrifice utility and dynamics for design. The BMW X6 and Range Rover Sport are current examples, though the upcoming Porsche Cayenne coupe would also be in this space. In the mainstream market, more xUVs are being offered with performance variants, including upcoming Ford Edge and Explorer ST models and the extreme 707-hp Jeep Grand Cherokee Trackhawk.

Overall increases in xUVs, and BEVs will drive continued increases in the number of nameplates offered. Some will be meant for mobility as a service use and some for private use. In 2000, there were about 244 standard and premium nameplates in the US—excluding exotic brands like Rolls-Royce, Bentley, Ferrari and Lamborghini. In 2010, the number increased to 294. By the end of 2018, it will reach 324. Further growth is expected, with more nameplates on tap for introduction in 2019 and 2020. Some will be related to the addition of battery electric vehicles (BEVs) designed for self-driving and the mobility-as-a-service future (MaaS). Speaking to the intensity of competition, average sales per nameplate have decreased from 71,000 units in 2000 to just under 54,000 in 2017. During the recession and at the lowest sales year this century (2009), there were 306 nameplates and average sales per nameplate were just over 34,000 units. While average sales per nameplate declines, the top 20 vehicles accounted for 36% of US sales in 2017. The increasing number of nameplates will continue to force a more competitive marketplace.

Globally, IHS Markit forecasts increasing light vehicle production. However, the increases are not spread evenly across sales regions. Instead, most production growth will occur in China and South Asian markets. Mature markets, like North America, are seeing a more stable environment. IHS Markit also expects continued decline for passenger cars and gains for utility vehicles—though some of this change will be pushed by automakers opting to reduce volume plans for some cars and for others eliminating some passenger car lines.

As production shifts to prioritize utility vehicles, availability of traditional cars will decline. Particularly in the near term, the combination of increasing participation in the utility vehicle market and the proliferation of battery-electric entries expected in the 2019 to 2022 timeframe will drive an increase in the number of vehicle nameplates offered and more than offset any elimination of passenger-car lines.