AUBURN HILLS, MI—Attendees at Makino’s 2017 Die/Mold Expo Sept. 13-14 learned how they can boost utilization and quality with high-performance controls as well as how to increase productivity through automation. In addition, they also had an early look at the V80S five-axis VMC that had its world premiere a week later at EMO in Hannover, Germany.

The V80S, according to Bill Howard, Makino’s product line manager for vertical machines, is a next-generation VMC for large parts that is the culmination of Makino’s technology. It offers 5-XC processing, Makino’s term for true continuous five-axis milling. 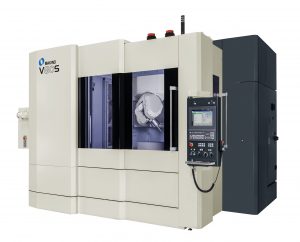 The technology, Howard said, allows significant time saving. He pointed to a mold for an automotive center console that was completed in a single piece on the V80S in 25% less time than traditional methods. Howard noted that the geometry and size of a part determines exactly how much faster it can be made using 5-XC. He also said that the continuous milling operation also improved quality to the point where postprocessing could be eliminated in many cases.

The V80S is aimed at the specialty mold and die market and features an updated spindle and titling/rotating axis unit that supports tighter tolerances and decreased machining and polishing times. It combines quick movements and accuracies with the latest software for high-speed motion control. Designed for high-speed finishing of multifaceted, 3-D contours, the V80S cuts cycle times and reduces handwork in complex specialty dies and molds. Its work envelope is 1500 x 1200 x 550 mm.

Also being demonstrated at the Expo were two new (but previously introduced) machines that also feature 5-XC processing. The five-axis D200Z and the D200Z graphite VMCs are said to offer cycle times twice as fast as previous models. These units also are compact, making them attractive to small shops as well as large ones and allowing them to be easily automated.

The D200Z graphite is fitted with a graphite machining package to provide five-axis production of graphite electrodes. 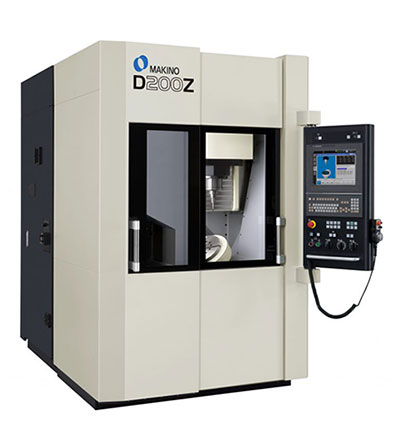 Makino also showed off the advances it has added to it Pro6 control. Every advance is aimed at streamlining operation of the control in order to speed production and accommodate machine operators of varying skills. All manuals for the control are loaded onboard for easy reference, are searchable and automatically updated.

Pro6 is available on all machines except for the F Series.

In addition to addressing needs of the shop floor, Makino provided information of use in the front office in the form of a presentation by Gregory Daco, chief US economist for Oxford Economics. His talk, “Navigating a World of Uncertainty,” pointed out that while there are many positive financial signs and economic momentum is also positive, there are significant risks facing the US and the global economies.

The most significant among these are the chance that the US might make mistakes in setting economic policy and the possibility that there might be missteps in dealing with North Korea’s nuclear ambitions.

A less catastrophic issue that needs to be dealt with is the fact that China is working to transition from an export economy to a consumer economy. This would see an increasing share of China’s manufacturing output being consumed in-country, leading to a drop in exports with an attendant rise in the price of those goods.

Still, Daco asserted the US is in a maturing labor market, which should lead to wage growth.