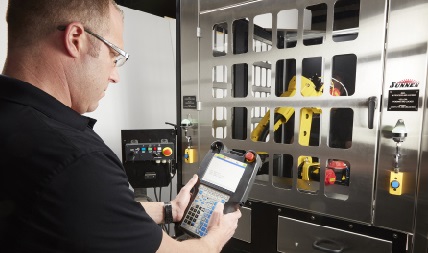 You would have to go back in time more than 80 years ago to when automobiles were still newfangled technology to trace the development of honing technology. Its earliest uses included de-glazing cylinder bores of early auto engines and imparting crosshatched surfaces for distribution of oil, an application that continues to this day to deliver important benefits to engines, bearings, hydraulic valves, and seals. And, yes, it was smelly, oily and messy. But that has changed. Honing machine builders have literally cleaned up their processes with good housekeeping and a commitment to advanced technology and operator safety.

It goes without saying that CNC machine technology and improved tooling technology are producing near-net shape workpieces that require less metal removal today to achieve tolerances that were once provided by honing. According to Phil Hanna, product manager, machines and accessories, Sunnen Products Co. (St. Louis, MO), honing technology is taking dead aim at all of the challenges facing manufacturers. “Tolerances are getting tighter even compared with the recent past,” said Hanna.

“There is a demand for automation — especially for parts loading and unloading with the goal of untended operation, or at least the need for minimal operator assistance. Our machines are designed for ease of use with touch-screen programming and menu-driven setups that can be saved to the PC control,” he said.

“Diamond and CBN abrasives have increased tooling longevity for high-volume applications, and valuable machine data can be readily collected through MTConnect-enabled machines, capability that more Sunnen customers are inquiring about,” said Hanna.

“Not only is it possible through a third-party integrator utilizing the MT Connect feature in the control to monitor uptime and spindle hours, but you can plug in diagnostics like bearing vibration sensors or temperature sensors so that you can remotely monitor the machine,” he said.

In addition, machine technology is being asked to deal with new, more difficult-to-machine materials like superalloys, Inconels and stainless steels that typically produce long, stringy chips, are low on the machinability chart, and aren’t easily cut. Today’s honing equipment has to meet surface finishes on new materials that may have slight changes in material composition. Even so, these materials require adjusting the process to find the right combination of pressure, grit size, and speeds and feeds.

Looking to the future, Hanna sees two major trends on the horizon: a higher level of process feedback to maintain production efficiency and more automation with fewer people involved in production. To this end, Sunnen is keeping its eye on Big Data and the Internet of Things (IoT) and is in the process of creating a global process database to help speed the development of specific honing processes for customer applications, as well as monitoring machine operations and connectivity via MT Connect. “Our high-volume machines are PC equipped and have MT Connect capability standard. In addition, we are working on the capability to diagnose problems through both process and machine diagnostics. Current honing machines have automated lubrication and screen warnings for maintenance,” he continued.

Sunnen has also developed its own coolant system and uses both environmentally friendly, water-based coolants as well as some oils depending on the application. “We have developed our own coolant system line tailored to the challenges of the honing process which is effective and easy to maintain. The new SVF Filtration system has been well received by customers,” he said.

Sunnen’s machines fall into three classes. “We manufacture a range of tube hones consisting of seven base models (each with various standard stroke lengths) to handle everything from hydraulic cylinder repair work to removing a quarter of an inch of material from the 18″ [457-mm] diameter parts up to 14-m long for the oil industry.”

A second class of Sunnen’s machines are pedestal or horizontal machines. “These are small machines which range from models for toolrooms through medium and high-production OEM work to applications like hydraulic cartridge valves and gears. The new SH 4000/5000/6000 series have many different features as standard and include PLC touch screen controls and improved maintenance and safety features,” he said.

The third class of machines are vertical machines for honing small-diameter bores all the way up to 9″ (228-mm) bores for locomotive cylinders with six base models. Taken all together, Sunnen makes 23 base machine models to cover a wide range of applications. Sunnen produces different size tube hones to match a 2, 4, or 6-m part or different size vertical hones for a 30 or 60″ (762, 1524-mm) stroke. One market you won’t find Sunnen in is the automotive engine OEM market which utilizes large transfer lines.

Sunnen produces two types of honing processes: single pass and conventional multiple pass. Single-pass honing can be described as an adjustable diamond sleeve which is used in a Sunnen VSS2 machine which does not include a tool feed system. The part is indexed to four or more spindle stations where each tool takes a small amount of material in one pass until the final sizing step. Single-pass honing is very good for powder metal parts for applications like sprockets for engine timing chains. Conventional honing is done by multiple application of the reciprocating, turning motion of the abrasive stone which is fed out continuously to size the bore. “Each of these types—single-pass and multiple-pass honing—have parts that they are better suited to, and it’s important to pick the right one,” said Hanna.

The days when honing machine operators would place their hand on the part while honing and know just how much to feed out the stones are gone for many reasons—safety being the most important. The fact is that there aren’t a lot of those old-time operators around anymore. “Surface finish is also important,” said Hanna. “Often, the part comes to the hone not so much to hit diameter or improve geometry as to impart a surface texture for oil retention on the bearing surface or prevent seal leakage.

“We’ve come a long way in programming and setting up machines and making them intuitive for the operator,” he continued. “Machines have touch screens and servo motors for ballscrews. All the operator has to do is plug in the numbers, refer to saved setups and run the job.”

As a result, Sunnen is always looking at other types of abrasives, different types of diamond, CBN, and adjustments to its bond formulations. Sunnen currently has 21,000 abrasive part numbers, 7250 tooling, and 20 types of honing fluids to allow tailoring of the process to the application.

The Next Step: Lapping

For a critical application like aircraft control valves—parts with tight tolerances and no desire on the part of the manufacturer to have a skilled operator putting his hands on a moving spindle—Sunnen introduced a bore lapping system at IMTS last year. “It’s expensive, but it’s automatic and laps back and forth with gaging to ensure the size,” said Hanna. The SVL-2115 is a multistage automated lapping machine that laps and air gages bores in one setup. The new SVL-2115 is based on the same modular platform as the SV-2100 honing system. It provides single setup processing of aircraft hydraulic aero sleeves, and other parts that are prone to distortion when honed. The system uses an index table to move the part to stations that automatically lap and air gage bores throughout the cycle. Gage readings are fed back to the control and the cycle is repeated until the parts are within spec.

“Automated lapping is more consistent than manual and there are fewer workers with the skills necessary for precision manual lapping. For these very expensive aircraft parts, an automatic lapping process reduces the possibility of parts being ruined due to human error,” said Hanna. “Since lapping is usually the last process during the machining of a workpiece, if the lapping isn’t correct all the work to get the part produced up to that point is wasted.”

The Sunnen lapping system was developed to automate what has been historically a manual hands-on process. The system handles workpiece diameters from 6.5 to 20 mm, and lengths up to 12× the bore diameter, not to exceed 200 mm. Spindle speed range is 100–2000 rpm during lapping, but is capable of slow speeds for nonpowered steps, such as lapping paste application or slow-rotation bore entry. Stroker speed is 0–350 spm with stroke length optimized to achieve a high degree of cylindricity.

Nagel Precision Inc. (Ann Arbor, MI) is well known as one of the two leading German suppliers of production honing systems for the automotive industry. “Most of our OEM customers have migrated to flexible, high-volume Nagel Roto honing systems, but we still offer transfer line technology to those OEMs who want it and haven’t transitioned to the newer honing systems,” said Sanjai Keshavan, manager ECO Hone & Microfinishing Systems Div. Nagel, which offers honing systems for high-volume automotive applications, has developed its ECO honing line for medium and lower-volume operations, such as rapid changeover job shops and smaller and medium-sized manufacturers.

“These machines feature all the advanced technologies that are incorporated in our high-end honing machines, including in-process gaging, automatic wear compensation, and servo/hydraulic dual expansion,” he said. “With the dual expansion technology, it is now possible to rough hone, finish hone, and gage all in the same head without any manual intervention.

He noted that traceability is a very important capability, so Nagel’s machines are now equipped with bar code readers and part markers. With this, the final gage reading, honing parameters and time stamp for each part can be tied to the bar code and exported to a central database and the bore classification marked on the part.

To meet the challenge of tighter tolerances, for example 2 or 3 μm cylindricity, and to enhance flexibility, Nagel has developed a hybrid ECO honing machine that combines conventional stroke honing and diamond sizing in a single machine. The machine can either be run as a conventional stroke hone or can be switched over to run as a single-pass diamond sizing hone with the push of a button. This offers a very high degree of flexibility, especially for lower volumes, as this will replace two different types of machines.

Nagel’s ECO hones are smaller vertical machines that can be manual or automated. “Hydraulic valve bodies with multiple bore diameters are quite deep,” said Keshavan. “When they are finished by boring, parts tend to be banana shaped. In the past, people would either diamond size the bore or conventional stroke hone it. While in conventional stroke honing the tool going inside the bore oscillates while expanding, the single-pass diamond sizing goes inside the bore just once.”

According to Keshavan, the problem with diamond sizing is that it follows the banana shape and doesn’t correct the straightness, but does provide good size control between the different lands. Conventional stroke honing provides good straightness correction, but the size between lands tends to vary more. “With Nagel hybrid-style ECO machines, we can stroke hone during the roughing operation and diamond size during the finishing pass,” he said.