The North American Manufacturing Research Conference (NAMRC) is the flagship event of the North American Manufacturing Research Institution of SME (NAMRI/SME)—the premier international forum where academic and industrial leaders in manufacturing interact with each other and advance the field. The distinctive feature of NAMRC is the presentations and critical discussions of research on technical innovations and new methods and applications of leading-edge technology from around the world.

The first NAMRC was organized in 1973 by a group of researchers interested in discussing and disseminating research results in the field of manufacturing. For its first few years, the event was known as the North American Metalworking Research Conference, but the word “manufacturing” soon began to be used to recognize the expanding base of research. From its inception in 1973 until 1981, NAMRC was facilitated through its Scientific Committee. In 1982, NAMRC became an affiliated organization of the Society of Manufacturing Engineers (SME) and became known as NAMRI/SME.

NAMRI/SME brings together researchers from leading companies, government laboratories, academic institutions and industrial think tanks located around the world for the purpose of advancing the scientific foundation of discrete-parts manufacturing. This group’s work covers refining fundamental technologies and developing emerging technologies and processes for material removal and material forming, as well as research on manufacturing modeling, simulation, monitoring and control systems.

A bound volume of papers presented at NAMRC has been produced, under the titles Proceedings and Transactions, from 1973 to 2010, to serve as a permanent record of the research ideas and results presented and discussed at the annual conference. Beginning in 2011, the Proceedings of NAMRI/SME was published in CD format only, and in 2015 Elsevier’s Procedia Manufacturing became the publishing venue for the Proceedings of NAMRI/SME that has faithfully documented the tremendous evolution of manufacturing science and technology.

After 44 successful years, NAMRC has been recognized as the preeminent international forum for presentations and dissemination of original basic and applied research in advanced manufacturing. This year, NAMRC 45 will be hosted by University of Southern California on June 4–8, 2017, in Los Angeles. Manufacturing has regained the global recognition and increased investment in research funding support due to its impact to transform the society. This is represented in the quality and quantity of the 142 accepted research papers, out from 176 full paper submissions, to be presented at NAMRC 45. 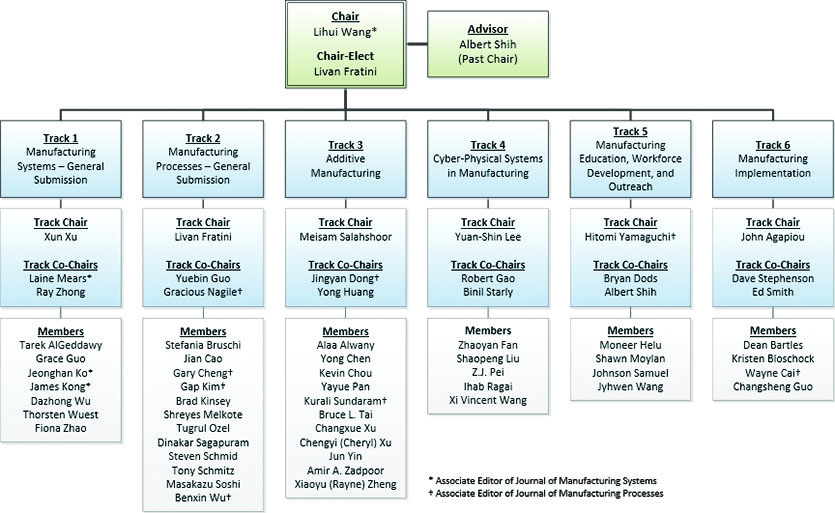 Because of the increased number of paper submissions to NAMRC 45 and reduced paper acceptance rate to 81%, the quality of accepted NAMRC papers is further strengthened this year. Moreover, to encourage industrial participation in NAMRC 45, opportunity for presentation only is made available to industrial participants to share the state-of-the-practice and best practice in manufacturing companies.

NAMRC 45 is collocated with ASME’s Manufacturing Science and Engineering Conference (MSEC) and JSME’s (Japan Society of Mechanical Engineers) International Conference on Materials and Processing (ICM&P). It is expected that more than 600 people will attend the three co-located manufacturing conferences for knowledge exchange and networking. The registration to NAMRC 45 is open. More information about the conferences can be found at 2017namrc-msec.usc.edu.

To encourage truly visionary concepts of research and education, the inaugural NAMRI/SME Dornfeld Manufacturing Vision Award and Blue Sky Competition, funded by the National Science Foundation, recognizes outstanding vision and leadership within the manufacturing community. The award was named in honor of the late David Dornfeld, PhD, FSME, a longtime SME member and leader of the Laboratory for Manufacturing and Sustainability at UC Berkeley, who passed away unexpectedly in March 2016 at 66. Dornfeld was regarded as a global leader in sustainable manufacturing and smart manufacturing. A special “Blue Sky Ideas” track will be held on June 6 to emphasize visionary ideas, long-term challenges, and opportunities in research and education that are outside of the current mainstream of manufacturing education and research. Learn more at sme.org/blue-sky-competition.