China is now the largest single market for light duty vehicles, such as cars, light trucks, and sport utility vehicles. Speaking at a University of Michigan Transportation Research Institute sponsored conference titled “Inside China: Understanding China’s Current and Future Automotive Industry,” Mike Jackson, a senior executive of IHS Markit, said that there were over 25 million such vehicles sold in China in 2016. The market could easily top 30 million units by 2021. In part, that will be spurred by the rapid growth in Chinese Gross Domestic Product, or GDP. The economy is currently expanding at an astounding 6.5% rate, according to Jackson’s data, easily supporting the growth of car-owning public

Compare this to the typical North America market of 15 million vehicles, more or less depending on the year, with little overall projected growth and you can see the opportunity available for those wishing to do business in the country.

Will they be able to sustain such a high growth rate in their GDP? At least one analyst at the conference thought not and explained his reasons. But even a slower market is still large.

While opportunity is in the numbers, some of the risks in China lies in the diversity of the market.

It is diverse in many ways, from nameplates to companies to supplier structure. The industry is also structured in quirky ways due to the country’s one-party state with conflicting goals and commitments to capitalism and profits. One of the more memorable pieces of data that Jackson showed was that there are 915 different nameplates serving China. Again, contrast this with North America’s 354., almost three times less. Despite its size, “China is competitive and the market is fragmented,” said Jackson. Another interesting fact is the popularity of SUVs. He views manufacturers who have strong capabilities in delivering SUVs as being particularly competitive even in a crowded market. 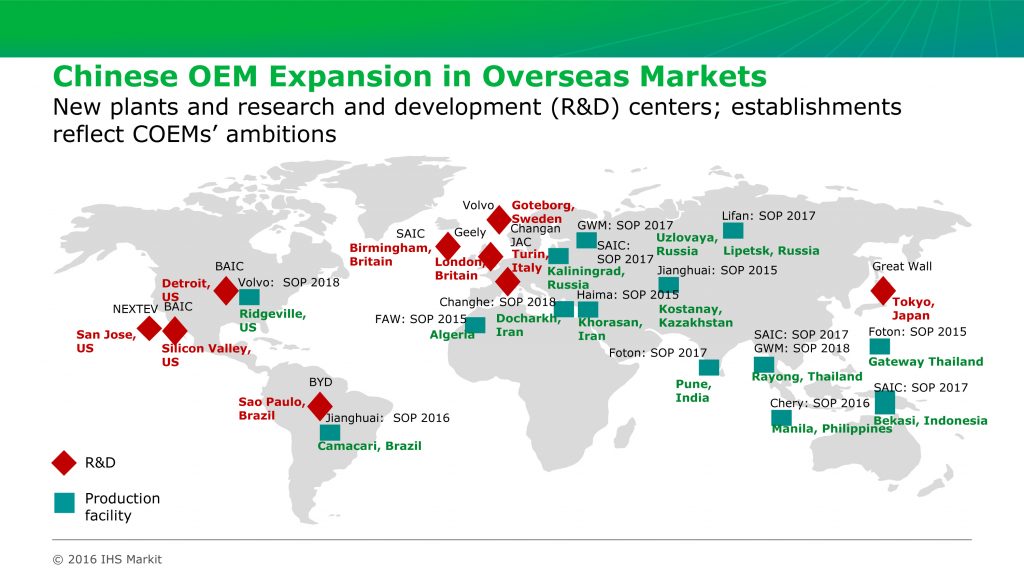 A key element in the growth and make-up of the market is the government policy to provide tax breaks to vehicles with engines of 1.6 L or smaller. “Increase in [average] household income is also driving mobility, but this policy is really driving for companies that can supply those vehicles,” he said. Volatility is an issue. Growth in demand growth and in market segmentation changes frequently year-to-year, according to him. Much of this volatility comes from a government that can make – or unmake – policy very quickly compared to other countries. For example, the tax break for small engined cars is due to expire at the end of 2016, yet Chinese industry groups may successfully lobby to extend the break.

Despite strong growth spurred by government policy, one of the surprising facts he showed was manufacturing capacity utilization – hovering just north of 60%. “Compare that to 94% overall capacity utilization in North America,” he said. “The 60% overall figure is disproportionate across all OEMs, as there are winners and losers in the market.” One way to solve this underutilization problem is to build vehicles from modular platforms. Automakers supplying vehicles are a mix of Chinese state-owned-enterprises, or SOE, and privately-owned-enterprises, or POEs, and joint ventures with global car companies, or JVs. The JVs in particular might have advantage in leveraging their global platforms in creating vehicles tuned for the Chinese market.

The Push for EVs – Clean air and National Advantage

The motivation for the tax policy on small cars came from the government’s push for better fuel economy and to reduce pollution. That is also spurring China’s push into Electric Vehicles as well, what China calls New Energy Vehicles, or NEVs. “Even as there is capacity underutilization, there is capacity expansion in China. New energy vehicles are a significant driver of that expansion,” he said, albeit characterized by variety as well. His company projects 146 separate NEV nameplates by 2023 (compared to only 19 in North America.)

“Chinese manufacturers have global ambitions. China is expanding overseas as well, not only new plants by R&D centers as well,” he said. He noted that the growth and emphasis on EVs in China is not only to reduce urban air pollution, but also as a way for Chinese companies to compete globally. Trying to match the expertise of companies specializing in ICEs might be tough. GM has been building ICE cars for over a hundred years, but EVs are so new everyone has a lot to learn.

John Jullens, a partner with PwC Strategy&, also spoke at the conference, noting that both China’s economy as a whole and its automotive industry are in transition. He said three trends in particular are shaping the near-term future.

First, China recognizes that it must upgrade its industrial base and rebalance its economy away from capital investments and exports towards domestic consumption and services. Second, China’s own automotive industry is maturing rapidly, with impacts on industry structure, competitive dynamics, and required organizational capabilities. Third, new automotive technologies and business models (think car sharing) offer both challenges and opportunities. He agrees with Jackson from IHS that China’s leaders view vehicle electrification and intelligent autonomy as an opportunity to leap-frog established car companies.

One of the most profound insights about China that affects everything including manufacturing is the realization that how China was can no longer continue. “The engine that drove the economy over the last 30 years has come to its natural end,” said Jullens. What the Chinese economy was able to do successfully was shift non-educated, low-skill farm labor into light industry in an export-driven economy. “You can keep doing that until that surplus of subsistence farm labor runs dry,” he said. Apparently, this is a well-known phenomenon in labor economic theory. “Easy productive gains end and you have to migrate into higher value added industries to keep progressing economically, this is known as the ‘middle income trap’,” he said. “This is not easy for a country to get beyond this trap.” He does advise not accept forecasts of an impending Chinese financial implosion as a result, apparently reported in other outlets. But, a ‘hard landing’ recession may be coming.

The important point Jullen stressed was that China’s growth had to slow down, and will be largely policy driven from the central government. “Too much GDP growth is not a good thing because it would be investment driven in an environment in which there is industrial overcapacity. If China does not slow down, its problems only get bigger,” he said. He also cited other factors that the leadership will attempt, including cleaning up the environment, implementing structural reforms, increase domestic consumption to offset exports, and upgrade the industrial base to accommodate a higher value added ‘next economy.’

Another key point he made is that the Chinese automotive industry has arrived at an important inflection point in its own lifecyle. Annual sales are expected to slow. He expects an orderly shakeout of domestic car companies, maybe it should have happened already. “China is a little different in that domestic car companies tend to be tied to local governments, which is one reason why there is so many of them,” he explained. “The auto industry is much more decentralized than most people realize.”

Nevertheless, despite its many challenges in an economy that is transitioning, Jullens noted that the automotive industry is one of the pillars that China is looking to invest in. There is reward amid the risk.