There are pros and cons to using a scaffold for tissue printing. Ultimately, it’s not a matter of choosing one method over the other, but using them to complement each other.

A little over a year ago while working on an article about the commercialization of bioprinters and their collateral materials, I had a conversation about using a scaffold vs. scaffold-free tissue printing with a source from Organovo, the California company that’s selling 3D-printed tissues for research.

His attitude was “Why use a scaffold?” If you put enough cells in close proximity to each other, they’ll grow and organize without one, he said.

I mentioned this to Ibrahim Tarik Ozbolat, associate professor of engineering at Penn State University and a bioprinting researcher, earlier this year. At the time, I was working on yet another story, a piece about best practices in bioprinting.

As it turns out, it’s not a matter of choosing one mode over another, Ozbolat said. Both scaffold and scaffold-free bioprinting are not only useful, the two methods are also necessary if science wants to scale up from small pieces of tissue to full organs, he said. Neither method alone will get us there.

“Although there is a perception that scaffold-based and scaffold-free bioprinting compete with each other, they can complement each other toward the demanding goal of larger-scale tissue and organ bioprinting,” he wrote in a 2015 paper entitled “Scaffold-Based or Scaffold-Free Bioprinting: Competing or Complementing Approaches?”

In the paper, published in the Journal of Nanotechnology in Engineering and Medicine, Ozbolat explained the two methods in more detail, summarized the pros and cons of scaffold vs. non-scaffold bioprinting in a comprehensive table (see table), and discussed the plusses and minuses more thoroughly in the text.

With scaffold-based bioprinting, “Cells are printed within exogenous biomaterial matrix such as hydrogels to support their growth, proliferation and interactions in three dimensions,” Ozbolat wrote.

Without a scaffold, “exogenous biomaterials are not used to house cells to enable a 3D network for their interactions; rather, the cell pellet is confined in a printed mold structure to let them aggregate and secrete extracellular matrix components to hold them together.”

Organovo’s approach is to use molds, and it works just fine for the job they have at hand.

Ozbolat, while not commenting on Organovo’s method, compares using a mold to using supports in additive manufacturing for supporting overhanging material, which is a common practice.

But Ozbolat has in mind a bigger goal than making tissue samples to more humanely test drugs or personal care products than on animals and humans. He wants to fabricate replacement organs, and is working methodically with others in the scientific community to complete the necessary steps to do that. They’re sharing what they learn along the way in journal articles like his.

“Scaffold-based bioprinting techniques in general enable deposition ease and practicality for tissue fabrication,” Ozbolate summed up. In the scaffold-free approach, “the hydrogel-free nature of the biomaterials facilitates quick fusion and maturation of building blocks (cells).”

In another of Ozbolat’s publications that preceded his 2015 paper, “A Hybrid Bioprinting Approach for Scale-Up Tissue Fabrication,” in the Journal of Manufacturing Science and Engineering, the researcher wrote about work he did with the team at his previous lab at the University of Iowa.

In that proof-of-concept project, researchers used a customized multi-arm bioprinter and a scaffold to make a vasculature with umbilical vein smooth muscle cells. They used the scaffold-free approach to print tissue strands that self-assembled into fibroblast, a type of connective tissue. 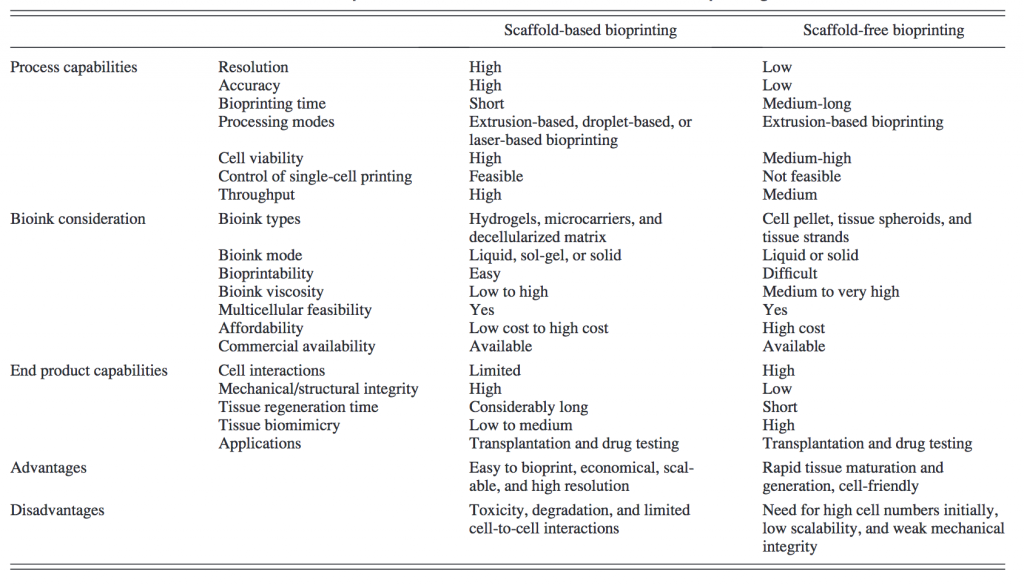 Vasculature is necessary to keep tissue viable by carrying nutrients, growth factors and oxygens to and waste products away from it. It remains the Holy Grail for bioprinting organs.

After demonstrating his lab’s hybrid approach of printing a network of vessels with a scaffold, and non-scaffold-printed tissue strands that fuse and mature, Ozbolat said in an interview his Penn State lab is working on getting the vasculature to sprout capillaries into the tissue. Others have successfully coaxed these mini vessel branches to sprout within spheroid-shaped pieces of tissue, but not into cell strands. The Penn State team is also trying to overcome the problem of beefing up the vasculature’s mechanical integrity to enable it to withstand forces from the tissue strands, while still maintaining its ability to make capillaries, he said.

Ozbolat’s 2015 paper refers to research by others that hold potential for a hybrid bioprinting approach. In one study in Tokyo, researchers used a 3D printer to make sheets of heart cells that sprouted capillaries to connect with a blood vessel in the presence of growth factor. A second study, also from Japan, reported on how pluripotent stem cells, the type that can be coaxed into becoming any cell type, could be used to make a vascularized, functional liver by transplanting it into a human.

“Our goal is to make organs,” Ozbolat said. “It’s just a matter of time.”