World aircraft industry growth is sputtering. While military demand remains robust, most civil segments are feeling the impact of negative macroeconomic and geopolitical developments. We saw almost no growth last year, and we won’t see any growth this year either.

This summer was an inflection point for the jetliner industry, which by a wide margin is the biggest segment in the industry. We’ve just had a 12-year super cycle. Airbus and Boeing guidance, until recently, indicated that they expect a 17-year super cycle. For some time now, there’s been a disconnect between our prosperous aviation industry and the rest of the world, which is seeing higher instability and slower growth. The jetliner industry, sadly, is falling in line with that environment. While there will be some additional modest growth, it will be in the 4-5% range, rather than the 9% or so of the past 12 years.

On the positive side, military fixed wing segments, particularly fighter aircraft, are still growing. In April, SIPRI reported that global defense spending rose in 2015 for the first time since 2011. The Mideast, inevitably, is at the center of this increase. US defense procurement is also rising.

However, this military market strength is not enough to compensate for the weakness we’re seeing in the civil rotorcraft and business aircraft markets. Both markets were transformed by unprecedented growth waves in the last decade. Both have spent the last eight years seeking renewed growth, with no success. But most of all, these two markets are now falling, largely due to the decline in energy prices and other factors. 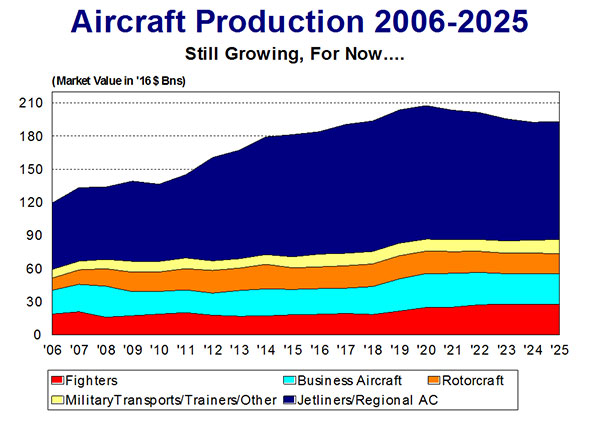 The world aircraft industry is still growing. That’s the good news. The bad news is that the growth rate downshifted significantly last year. Meanwhile, the sluggish level of growth that remains is threatened by several looming macroeconomic trends. Most of all, the jetliner primes’ lofty production goals appear out of line with economic reality.

Several market segments have already been impacted. The result was a weak 2% growth rate for 2015 over 2014, measured in value of deliveries. This compares with the 7.1% compound annual growth rate (CAGR) seen in 2010–2014.

Lackluster economic growth, particularly in emerging markets, is one of the two big culprits. China, now the largest jetliner market in the world, is weakening noticeably, with GDP growth falling below 7% last year. Russia and Brazil are stuck in a serious downturn. India’s civil aircraft demand has also been disappointing. Last year, Boeing delivered a mere three jetliners to the country, down from a peak of 36 in 2007.

Meanwhile, Airbus and Boeing jetliner deliveries to China ramped up to 301 aircraft. That’s a record, both in raw numbers and as a percentage of the total market. But again, China GDP numbers are dropping to a level not seen in 25 years.

Weak energy prices are the second culprit. Inexpensive fuel reduces the incentive for airlines to replace their older jets, and last year saw a worrying 38% decline in older jetliner retirements. While Airbus and Boeing show no signs of slowing down their announced production increases, there are more than ample reasons for caution. It’s quite possible that the long jetliner output ramp—an extraordinary 9.2% CAGR between 2004 and 2015—is disrupted as customers defer. If interest rates rise more than the modest increase anticipated in 2016, the problem will get worse still.

Cheap oil and other commodities also reduce demand for oil field exploration and support helicopters. This segment’s weakness drove civil helicopter deliveries down 5.3% by value last year. The rotorcraft industry may be the most vulnerable to cheap oil because of the proliferation of new models aimed at the exploration segment, with AgustaWestland’s AW189 and Airbus’s H175 entering service over the past two years and Bell’s Model 525 slated for arrival in 2017.

What’s most concerning is that we don’t know how long prices will stay low. Most guidance points to prices finishing 2016 at about $50 per barrel with a gradual recovery to the $70–$80 range.

On the positive side, while Mideast regional tensions and military actions are not affecting oil prices, they are having a strong effect on demand for combat aircraft and other defense equipment. Combat aircraft sales to this region are up markedly, particularly as Mideast countries diversify their strategic relationships by looking for second sources of aircraft and other weaponry.

Dassault provides an excellent illustration of almost all the key international aircraft market trends. The company sold 24 Rafales to Egypt and 24 more to Qatar last year. These were the first firm Rafale export sales, despite over 25 years of heavy marketing and false starts. This was Egypt’s first purchase of a non-US combat aircraft in decades, reflecting concern about another US arms cutoff. Meanwhile, sales of high-end Falcon business jets suffered a serious drop. Overall, 45 were sold, meaning that for the first time in decades Dassault sold more combat aircraft than business aircraft.

Last, the US defense budget showed surprising strength. Not only did weapons procurement recover to a respectable $111 billion in FY 2016, but spending on combat aircraft ramped up to nearly $12 billion, a very strong number. Coupled with high export demand, these numbers promise continued strength for the military side of the business.

Overall, while 2015 saw a slight 0.3% drop in military aircraft output, orders have been strong. This year, the military side of the industry will grow by a respectable 6.3% in value over 2015.

By contrast, we expect the civil side of the industry to grow by just 1.2%, with further jetliner output growth (2.2%) dragged down by more softness in high-end business jets and civil rotorcraft. The total aircraft industry growth rate in 2016 will be just 2.4%, about the same as 2015’s number.

And most of all, the two large jetliner primes need to re-think their production ramp plans. Airbus and Boeing expect single aisle output to expand at a 13.1% CAGR through 2019, with twin aisles expanding at a 9.4% CAGR. A very difficult world macroeconomic environment, coupled with the strong prospect of a long period of cheap fuel, means we may see these plans slow considerably.