The prime contractor for supplying automation tools to the Airbus plant in Broughton, UK, which is assembling the wings of what will be the world’s largest commercial aircraft–the A380–is Electroimpact Inc. (Mukilteo, WA). Wing assembly occurs in several phases:

Electroimpact collaborated with Bosch Rexroth (Hoffman Estates, IL) to provide hydraulic and linear-motion solutions, because Rexroth could meet the necessary technology specifications and schedule requirements. Electroimpact needed to phase-in machinery delivery as the facility ramped up operations to position and drill the approximately 180,000 holes needed to produce a single Airbus 380 wing box, then insert rivets and bolts. A higher level of automation enables the Broughton plant to employ a process-flow model to produce four pairs of wings a month.

When the Airbus A380 takes wing in 2005, it will be the largest commercial aircraft in the world-and the only twin-deck, four-aisle jet in the air. The base passenger design will seat 555 in three classes, and the triple-decker freighter design will haul up to 150 tons (165 t). By comparison, the US military’s tank-transporting C-5 Galaxy hauls a maximum 135-ton (149 t) payload.

The wing-manufacturing process for the A380 consists of creating a framework from spars and ribs–the wing structure–which is eventually covered with metal panels. Spars run the length of the wing. In addition to front and rear spars, a 21′ long X 6′ wide (6.4 X 1.8 m) spar runs down the wing’s center. Ribs cross the spars, extending from the leading to the trailing edges of the wing. Panels consisting of an aluminum alloy skin reinforced by stringers are attached to this framework. 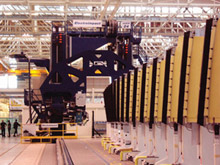 Panels are produced concurrently in a separate operation. First, skins are formed to the proper curvature. Stringers are then attached to the skin by E4380 riveting-bolting machines in the Stage 00 cell. Completed panels are moved to the structure for assembly. After being loaded into a jig, the panels are positioned, drilled, countersunk, riveted, or bolted with titanium lockbolts onto the pre-drilled framework. The A380’s upper wing uses the largest, (111′ or 34-m-long) single skin.

This process is both labor and automation-intensive–a complete “wing box” takes weeks to produce, which is still fast by industry standards.

Construction of the A380’s wings presented several significant challenges for the Airbus manufacturing team in Broughton, and for Electroimpact.

For the Airbus programs, Electroimpact choose to work with Bosch Rexroth for its hydraulic and linear-motion solutions and applications expertise, as well as the company’s distributor, Pacific Power Tech (Seattle).

“The assembly process is done in two stages,” explains Electroimpact’s Ben Hempstead, mechanical engineering lead. “For Stage 00, Electroimpact provided four lines of fixtures for building up the upper and lower wing panels. This is a highly automated process in which riveting-bolting machines traverse the panels attaching stringers to the skin. Virtually no manual labor is required in this cell.”

Next, the panels are moved to the structural wing-assembly process. The size and weight of a completed panel–up to 111′ long and weighing as much as 8818 lb (4003 kg)–poses a big problem. “Using cranes doesn’t work,” says Electroimpact’s Theodore Karagias, project engineer. “The wing panels distort when suspended from the cranes.”

Instead, Electroimpact devised a multiarm manipulator to maintain the panel’s proper form and provide precise positional control while presenting the panel to the wing structure for fastening.

The Stage 01 structural wing-assembly process is more labor-intensive than the previous operation. Assembled skin panels are positioned by the manipulator into four-story-high jigs that contain other wing parts–ribs, spars, and leading and trailing edges. For the upper wing, a combination of mobile drilling machinery (HAWDE) and manpower accessibility is required over the large surface area of the upper wing panels. For the lower wing, holes as large as 1.25″ (31.75-mm) diam are drilled for bolting the lower wing skins to undercarriage reinforcements.

To manufacture skin panels, Airbus UK and Electroimpact teamed up to create a highly automated facility.

“We faced several challenges in this program,” says Hempstead, “namely how to bring a fixture of stringers and machined skin panels together in a precise build configuration, while an automated machine tool fastens the components into a skin panel assembly.”

Each wing surface consists of five panel assemblies, which include a total of 20 panels. The Airbus Stage 00 facility produces 16 of these panels.

Traditionally, panel assemblies were built on manual jigs, requiring many skilled workers to locate and drill holes, pull components apart for deburring and cleaning, apply sealant, and insert two-piece lockbolt fasteners. Panel assemblies were then transported to a riveting machine for final rivet installation. Production rates were limited by the number of jigs in production, worker access and speed, and hole quality and rework requirements. Finished panel quality was also limited by how well the fixture held the components in proper contour.

“Building on our previous work for the Broughton facility, we ended up expanding the system’s performance envelope and the accuracy of earlier panel-production machinery,” says Hempstead. “The result is a new generation of wing-panel machines. Our design goal was to enable one operator to set up, load NC tapes, verify accuracy, and configure the fixtures.”

For the Airbus A380 panel-production facility, Electroimpact built four machine lines, each with two machines for upper and lower-surface panels. Each line includes three fixtures, where four panels are loaded. The jigs hold the components in accurate form and location while the automated machines drill, rivet, and bolt the components together. Sealant is applied to the components during the jig load. No temporary fasteners are used, so wing panel assemblies are complete after fastening. No interim operations are needed for cleaning and deburring.

The one-up assembly process reduces handling damage and positioning inaccuracies (datum errors). The machines can install rivets and bolts in diameters of 1/4 – 1/2″ (6.4 – 12.7 mm), with a stack range up to 2.5″ (63.5 mm). Automated cold working, hole probing, countersink sealing, and collar installation are all included.

“Accurate estimation of vendor-supplied product lead-time is critical in keeping assembly on schedule,” says Hempstead. “I’m happy to say that since operation began, the Stage 00 facility has been producing assemblies on time, and with far better speed, quality, and accuracy than manual and earlier automated systems.”

After the wing panels are produced, they must be moved to the wing-structure jigs. Their size creates a major material handling problem.

According to Karagias, handling a wing panel with multiple support points is very difficult. “Basically, you have a statically indeterminate system. The panels will twist, bend, and kick as they react to the forces introduced by lifting equipment.

“To overcome this problem, two of the six arms control the vertical position of the panel,” says Karagias. “The other four arms act as slaves, and impart a constant programmed force upon the wing panel. That way, when the positioning arms are commanded to move either up or down, the load-seeking arms follow along to maintain the panel’s form.”

The primary axis of movement is maintained in closed-loop servo control by a Rexroth HNC 100 servo hydraulic controller. The HNC integrates an SSI linear scale, a load cell, and a Rexroth servo solenoid valve. This configuration provides fine position control with seamless transition between position and force control. According to Karagias, the servo axis provides control over panel position, and the Rexroth HNC controller imparts several system benefits, namely:

After the wing panels are loaded in the Stage 01 jig, two operations are performed:

Based on previous successes, Airbus approached Electroimpact to automate wing-panel fastening to the wing structure. Traditionally, this task is done by drilling, bolting, and positioning the panels manually. Automating the process meant overcoming several challenges with unique solutions.

“The basic challenge was how to transport equipment from jig to jig between port and starboard wings, while accommodating necessary manual work on all vertical levels,” says Ryan Haldimann, project engineer, of Electroimpact’s HAWDE team. “In effect, the machine tool needed to be transported along Y(vertical) and X (horizontal) directions of travel, like a tool head in a gigantic CNC machine.”

As a solution, the Electroimpact team of six headed by Rick Calawa, mechanical engineering lead, created the HAWDE machine–a portable unit that can travel around a panel section by using elements integrated into each jig. To give workers access all around the wing structure, the jig incorporates “flip” flooring. Each flip floor consists of a small platform for worker access, which is pivoted up when the completed wing is removed. A single jig uses 150 flip floors, each employing a hydraulic cylinder for actuation. Ultimately, four jigs will be in use, requiring 600 Rexroth cylinders.

Because Electroimpact is responsible for both the jig and the HAWDE unit, an unprecedented level of integration was achieved. Right from the initial concepts, all mobile elements of the machine were integrated into the jig. A transporter crane moves the 7000 lb (3178 kg) machine from jig to jig. Level-to-level movement employs an elevator that is capable of aligning the machine beds to within 0.005″ (0.127 mm). 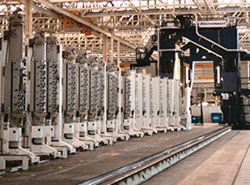 In addition to facilitating worker access, the HAWDE unit must drill holes in the wing where the flip floors are located. To reach areas of the wing where flooring is normally located, the machine performs a Y-Shift, where the Y-column of the machine extends above its normal position by about one meter. This is accomplished using a Rexroth size 45 roller rail system for guiding, and a hydraulic cylinder for lifting the floor.

Movement along the X axis uses a square-rail guideway and a gear rack. All other axes use traditional linear and rotational bearings. The machine incorporates a number of tools: a drill spindle capable of up to 7000 rpm in 1/4 – 5/8″ (6.4 – 15.88-mm) diam, a bolt inserter for inserting slave fasteners, a hole probe for measuring hole diameters, and a camera for synchronizing the machine to positioning (datum) holes in the wing.

Concurrent with wing-panel attachment, Stage 01 production also involves attaching the undercarriage reinforcing and wing skins to the landing-gear structure. Titanium flathead bolts up to 1.25″ (31.75-mm) in diam are inserted through a stack of materials up to 4″ (102-mm) thick.

“Traditionally, this operation is done manually in wing-box assembly jigs,” says Brent Thayer, mechanical engineering lead, the Electroimpact engineer in charge of automating this process. “But manual hole drilling requires massive drill templates and large positive-feed drill motors. The work is physically demanding. In spite of these large tools, the holes must be drilled in multiple steps to reduce the thrust loads, a process which adds process time. Plus, new templates are required for most wing design changes. In view of all the variables, achieving the required hole quality using a manual process is very difficult.”

“The time spent drilling in this area of the wing is less than 10% of total wing-box build time,” Thayer says. “To remain cost-effective, the drilling equipment must be flexible and mobile for use on multiple surfaces and assemblies. They use it, then move it.”

In conjunction with the Airbus UK team, Electroimpact developed a mobile automated drilling system for the A380 undercarriage area–the GRAWDE. The program involved an extensive cutter-development effort. The machine can drill up to 1.25″-diam holes with countersink in a single operation and 12 different wing surfaces in total.

Similar in design to a five-axis post mill, the GRAWDE uses a Rexroth roller rail for the X, Y, and Zaxes. The Y and Z axes use Rexroth ballscrews.

The GRAWDE machine pushes on the parts being drilled with a specialized pressure foot to stabilize the wing skin while drilling. Sensors or pre-programmed angles ensure the holes are drilled normal to the curved aerodynamic surface.

As with HAWDE, it was important to integrate the machine with the wing jig. “Over 90% of the wing box build is manual,” Thayer emphasizes. “So an ergonomic design that facilitates manual work access is a must.

“The goal was not just to design machinery that automates manual tasks,” says Ben Hempstead, “but also to improve quality and reduce process time.”