Blockchain in additive manufacturing (AM) offers immediate opportunities for military use, said Kenneth Church of nScrypt.

One of the first use cases will be to easily and securely replace broken or missing tools, Church said.

For example, the U.S. Army could place a 3D printer in a Conex box (a standardized steel shipping container) in a forward deployment, he said. If a part breaks, a soldier would take that part to the Conex box where a technician could then download design parameters in blockchain to print a replacement part. No information would need to be stored within the Conex box itself, eliminating the risk of what would happen if the box were lost.

“If I do that for a forward deployment, I can get a CAD file out there right away,” Church said. “The Army is seeing the benefit right now. Blockchain will be huge in helping move that forward.”

In general, AM is a prime place for blockchain because the process is already digitally driven and because the need is apparent. Additive will be a key driver in distributed manufacturing.

“Additive in and of itself is pretty digital,” IBM’s Krishna Ratakonda said. “It starts with a model that is transformed digitally and then printed right there. That’s definitely prime for enabling the technology.” 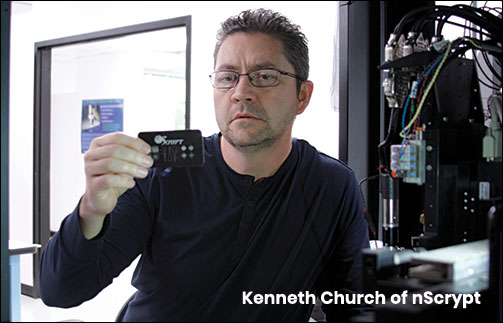 By using blockchain, manufacturers can monitor and even limit how many copies of a product or component are printed. That lessens or eliminates the possibility of, for example, a customer paying to print 50 parts but actually printing 100 and selling the surplus on the gray market.

“3D printing is changing many industries,” Ratakonda said. “It used to be low-volume parts that were difficult to obtain. 3D printing is becoming much easier and higher volume. Typically, you own the design for a part and go to the designer to print those parts. But how do you know if he prints 100 instead of the 50 you authorized and the other 50 go into the gray market? Once the design is out there, how do you know who is printing the design or know who leaked the design? Without blockchain, none of these is traceable.”

“The manufacturer makes a big profit off the (3D printed) parts they sell,” he said. “Blockchain provides a guarantee and a way to track who accessed my design, and how many times it was printed.”

Church concurred. “If you guys are going to make this, I will know how many you are making and where they are going. That’s huge from a vendor relationship (standpoint). Large companies will embrace this.”

Blockchain addresses the challenge of how to certify the product was printed using the original design and that the person who printed it had authorization, Microsoft’s Diego Tamburini said. “You can avoid counterfeiting, which is a big risk, and ensure the provenance of that part.”

Identify 3D is working on blockchain with Siemens, in terms of its relatively new AM network, as well as with SAP, IBM and others, Identify 3D’s Joe Inkenbrandt said at the recent International Manufacturing Technology Show in Chicago. “I can’t sell it today (in traditional manufacturing), because the quantities aren’t big enough for blockchain to be interesting. In two years, when quantities are big enough, our system will move right into that.”

When distributed manufacturing does take hold, “it’s going to happen quickly,” Inkenbrandt said. And when the average number of supply chain players rises to 30 from six, blockchain will “all of a sudden become really interesting.”

‘Supporting mechanism’ only, for now

In AM, smart contracts on blockchain could result in companies being licensed to produce X number of parts over X months and then being required to renew a license, Deloitte Consulting’s Joe Fitzgerald said. “This is a supporting mechanism to improve the business model of various additive applications,” he said.

But be careful about betting the farm on early blockchain, he cautioned.

For example, “If your entire business model is about controlling how many times people can print things with your blockchain solution and you get it wrong and people can print an infinite number, that’s a problem. It’s a new technology. People dive in and make mistakes.”