He will tell you he’s not an engineer. Nor is he a machinist. But if it weren’t for Whitney Sample’s expertise in design and manufacturing, Emma, Norah, and dozens of other disabled children would remain unable to play, draw, and “just be kids.”

Sample’s work began in the mid-90s at the Alfred I. DuPont Hospital for Children, Wilmington, (DE). It’s there that he helped design and then built a device called Wilmington Robotic Exoskeleton (WREX). The designs are available on the Internet today, but back then there were no websites where users could download 3D CAD models. Whitney had to figure it out on his own.

WREX makes kids’ arms feel weightless, an excellent thing when you’re born with a degenerative muscle disease. The technical term is gravity balanced forearm orthosis, and it’s good for a whole host of diseases, including arthrogryposis multiplex congenita (AMC), muscular dystrophy, cerebral palsy, and others. It even helps older people who may have contracted Parkinson’s disease or suffered a stroke, and are no longer able to care for themselves. WREX gives people young and old alike a chance for a better life.

“The user base that I developed over the years has made a point of reaching out to me and staying in touch. I do little side projects for them here and there, fixing broken devices, house calls on lifts and wheelchairs, stuff like that. It's never been a job that pays really well, but I've never been in it for the money; I’m in it to help people.” 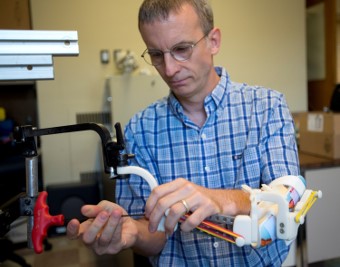 It wasn’t his idea—WREX’s basic geometry started as a university graduate student project. Whitney was the guy who made the theoretical possible, machining and fitting and fabricating the parts until he had it right. It took him six months to build the first one, far too long considering the countless children in need. As a self-professed techno geek, Whitney had been following 3D printing since its inception, and knew it was just the ticket for faster throughput and lighter-weight devices than his metal prototypes. He convinced the hospital to invest in a 3D printer.

“It was a blessing and a curse,” Sample said. “You love the fact that you can make the changes so quickly, but on the other hand it’s a little maddening because you can change things so quickly. I was literally making design modifications overnight and testing them the next day. Regardless, we were able to crank parts out a lot faster, and that meant we could help a lot more kids in less time.”

The 3D printer supplier caught wind of what Sample was doing and sent a filmmaker to document the story. In August of 2012, the video went viral, and when a Minneapolis design firm learned of Sample’s work, one thing led to another and the non-profit firm Magic Arms was born. The organization has since outfitted more than 100 children with orthotic devices and has another 150 on its waiting list.

Through it all, Sample has helped manufacture countless orthotic components, first at DuPont and later for Magic Arms. He’s no longer working at the hospital, though—weary of the slow pace of adoption and lack of funding for this important work, he opened the consulting firm Square Pebble Design two years ago. It’s stated mission? “To create adaptive solutions to a challenging world for those in need of a special assistance.”

“The user base that I developed over the years has made a point of reaching out to me and staying in touch,” said Sample. “I do little side projects for them here and there, fixing broken devices, house calls on lifts and wheelchairs, stuff like that. It's never been a job that pays really well, but I've never been in it for the money; I’m in it to help people. That’s what I love to do.”

In the Driver’s Seat

Metal Grinder Overcomes Fears, Perseveres to Secure a Good Life for Her Family