Mechanical Engineer, Business Owner Greg Burns Discovers that Helping Others is His Purpose

Businessman Greg Burns was looking forward to his retirement. He’d been searching for a small ranch in the northern part of Nevada, hopefully someplace with an airstrip for his small plane. He was thinking about selling his manufacturing companies, so he could enjoy the fruits of his many years in business. And then he went to Kenya.

“That trip changed my entire outlook on life,” he said. “I quickly came to the conclusion that my purpose was bigger, that I was not put here to serve myself but to serve others.”

Burns owns four companies, all of which he built from scratch. A mechanical engineer by trade, he began designing and building ring rolling mills and sizers 30 years ago, and founded Burns Machinery Inc. And since he now had a machine shop at his disposal, he pursued a passion he’d had since he was a kid—in 2002, he opened Dirt Tricks to produce replacement parts for off-road motorcycles.

“The trip [to Kenya] changed my entire outlook on life. My purpose was bigger, that I was not put here to serve myself but to serve others. It’s given me the motivation to succeed in business like I've never had before, because the bulk of my profits go to helping the people of Andrew’s village.” 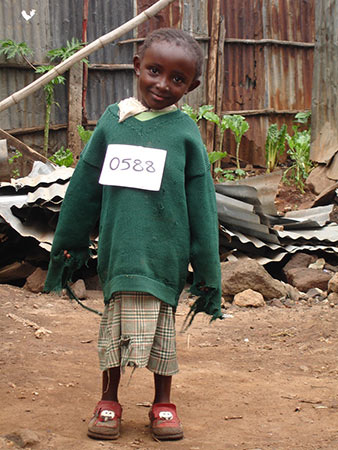 After 10 years of subcontracting dirt bike sprockets to a nearby laser cutting shop, he decided that quality and price could be improved by bringing those parts in house, so he bought his own 4kW fiber laser, and NV Lasercut was born. Since Burns is always coming up with better processes, he developed his own series of nitrogen generators under the brand name INTO-N2.

This would be plenty of accomplishment for most people, and some might argue that he deserved a well-earned rest on his ranch. His daughter inadvertently changed all that.

“She brought home [Andrew] an exchange student from college over Thanksgiving break,” he said. “He told us stories of the poverty he’d seen growing up in the slums of Nairobi.”

Burns and his family became close friends with Andrew. They stayed in touch with him throughout his school years, and after graduation, Burns and a group of people from his church helped Andrew to complete a master’s program at Boston University. Greg and three others from the church group decided to visit Andrew’s hometown in Kenya.

“We spent over a week there, and everything Andrew told us about the slums and the poverty was true,” he said. “The entire village measures less than three square miles but has 600,000 people living in it. The average income is about $2.00 per a day. We visited a school with 1,200 kids, most of them orphans, and because of the way the government operates, only a handful of them would ever be allowed to go past the 8th grade. We decided then that we needed to help in whatever way we could.”

Upon their return, Burns, his wife, and other members of the church group formed Bridge Ministries, so they could help fund the schools in Andrew’s village. They raised money to pay teacher’s salaries, to buy books and uniforms, and cover the tuition needed. They’ve sponsored children, putting some of them through college, and helped build camps and boarding schools. Burns has made efforts to develop clean water supplies, to prevent the dysentery that takes the lives of villagers.

As for himself, he’s put his plans of retirement on hold. “Everything has changed for me,” Burns said. “It’s given me the motivation to succeed in business like I've never had before, because the bulk of my profits go to helping the people of Andrew’s village. I and the others in our group work our tails off, but it’s an absolute joy—to completely change the outcome of so many and have such an impactful result on people’s lives. It’s why I’m here.”