Ethan Baehrend bought his first 3D printer when he was 13. He was fascinated by the technology and wanted to learn more about it. Today, the 18-year-old is the CEO of Creative 3D Technologies, a Chicago-based company focused on innovative 3D printing.

“I'm a techy person in general, so even at that younger age, I was toting around different robotics and creating things,” he explains. “I thought a 3D printer would be right up my alley.”

After his first 3D printer purchase, Baehrend began to consider what else he could with the technology besides make trinkets for his friends and family. He took apart his printer and learned how the various components worked—and began to get ideas about how to make the printer better. He designed better printer parts and used his 3D printer to create them.

“It was a mix of frustration, ambition, drive and determination to start this company. I was frustrated with how things were in the 3D printing industry.”

“Seeing how far we can push the current limits of 3D printing, where we can take the technology next, and what else we can make the machine do that most machines don't already do—that excites me,” he says.

With Baehrend, the entrepreneurial mindset came early. He built custom computers, then had a 3D printer refurbishing business for five years before starting Creative 3D Technologies. “I've had all sorts of smaller business endeavors,” he says. “My parents raised me to work for what I want.”

The inspiration for his business start-up was partly due to frustration with the bulky, expensive large-format printers he was using. 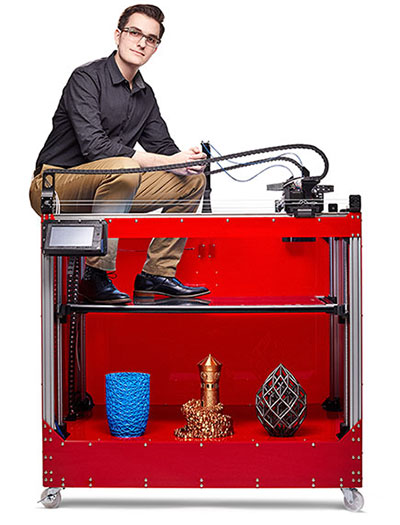 “It was a mix of frustration, ambition, drive and determination to start this company,” he notes. “I was frustrated with how things were in the 3D printing industry. So, I started Creative with the idea that we could make something better than what was currently offered, do things differently, and possibly disrupt the market in the process.”

“In my work, I wanted a printer capable of producing a lot of parts, as well as varied types of parts,” Baehrend explains. “A printer that could create something very large or very small. That type of 3D printer did not exist—people had to buy separate printers for different work. With the CreativeBot Duo, almost every part is not only optimized to use the highest-quality parts where it matters, it is also optimized to avoid many of the traditional problems found in 3D printers.”

“Think outside the box; I know it’s cliché, but if someone were to take it to heart, look at what they want to create and figure out how to do it differently, I believe they will be able to do a lot more,” Baehrend says. “It's one of the great things about 3D printing—you can create things in ways you weren't able to before. View whatever project you want to create with a fresh mind, without constraints.”

Do you have an interesting story on how manufacturing has changed you or someone else's life? Click below to submit your information to be featured in our Humans of Manufacturing series.
Share Your Story