Many of us experience a life-altering event at some point in our short time on Planet Earth. A near miss in a motor vehicle, a brush with cancer, the loss of a loved one—these incidents tend to change a person, making us realize the fragile nature of our existence and occasionally turning our own life in an entirely new direction. For Boonie, a one-time journalism major at Iowa State University, the day he flatlined in an emergency room was his lightning bolt.

To say that he makes furniture is a gross understatement. His work is an eclectic mix of metal, wood, and sometimes stone, handcrafted into basic yet complex shapes that complement their surroundings. Custom railings and staircases, planters and fences, wine racks, kitchen shelving and—most recently—a new line of furniture, there’s little that Boonie and Factor Fabrication won’t tackle. As long as it’s beautiful.

It's a September day in 2008. Twenty-nine-year-old Boonie has been home from school for a few days with what feels like pneumonia. Still, he’s on the phone talking to his professor about the lecture the two were working on, tentatively titled the “Globalization of Music.” 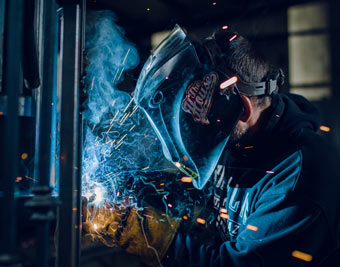 “I remember telling him, ‘Stu, I can't breathe. I have to get off the phone.’ Luckily, my mother lived just down the road from us and was heading home from work at that time. She picked me up and rushed me to the hospital, but it wasn’t a moment too soon. I flatlined as soon as they got me into the ER.”

After a helicopter ride to the Des Moines hospital and a few days in the intensive care unit, Boonie was told that he has a rare genetic mutation, called Factor 20210. Simply put, it causes blood clots. His shortness of breath wasn’t pneumonia: it was a pulmonary embolism, and he’s extremely lucky to be alive.

“I'm on blood thinners now and the doctors tell me everything’s good, but yeah, it was a life-changing experience,” he said. “I evaluated what I was doing, where I was going, and decided I didn’t want to continue in that direction.”

He grew up watching his grandfather work in the hobby shop. The old man liked to kid around, telling his grandson, “Don't look at the light when I’m welding, or you’ll have nightmares,” a joke that Boonie says scared him away from welding for years. Still, it was an inspiration, and after leaving the hospital he looked back at the carpentry and metalwork he’d witnessed as a boy and used it as the nucleus for what he now knew was his path forward.

“Considering that we started in the absolute bottom of the Great Recession and have climbed to where we are now, with a great crew and customers that appreciate our work. I'm pretty tickled—if things never change from what they are right now, I’ll be pretty happy with life.”

“I went out on my own,” he said. “I’d been working in the university’s mechanical department over the past few years, so I had finally learned to weld, and picked up some electrical and plumbing skills, and along the way I started repairing stuff—broken chairs and other miscellaneous projects. I really enjoyed it, so that’s what we did.”

Today, he and his wife Bethany employ four full-time employees. He says the first few years were nip and tuck, but he feels pretty good about the future. “It was 10 years last September,” he said. “There’ve been a lot of changes since then, considering that we started in the absolute bottom of the Great Recession and have climbed to where we are now, with a great crew and customers that appreciate our work. I'm pretty tickled—if things never change from what they are right now, I’ll be pretty happy with life.”