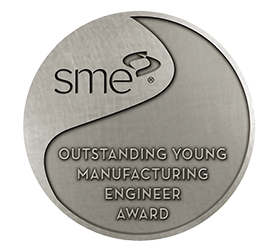 Since 1980, the SME Outstanding Young Manufacturing Engineer Award has recognized manufacturing engineers, age 35 or younger, who have made exceptional contributions and accomplishments in the manufacturing industry.

Nominees can be selected by the SME's International Awards & Recognition Committee based on a single outstanding accomplishment, such as technical publications, patents, academic or industry leadership, or for several significant accomplishments in one or more areas of activity. The impact of these accomplishments should be recognized beyond the nominee's own institution or company.

Note: SME membership is not a requirement for nominees.

Send the completed nomination form, two letters of recommendation and either a resume or CV no later than Aug. 1 of each year to:

The 14 awardees, including Michael Brundage, PhD, an industrial engineer at the National Institute of Standards and Technology, were selected based on their diverse manufacturing backgrounds, technology advancements/improvements and state-of-the-art research. Brundage (pictured to the right) leads the Knowledge Extraction and Application for Manufacturing Operations project and is the associate program leader for the Model-Based Enterprise Program at NIST.
2021 Award Winners Previous Recipients