Manufacturing is important to communities, regions, nations: In the US alone, manufacturing supports more than 17.6 million jobs—that’s one in six jobs–and accounts for nearly $6 trillion in GDP. More than 12 million Americans (9% of the workforce) are employed in manufacturing.

Today, manufacturers are enjoying a period of demand and growth, but they face significant challenges. The majority of manufacturers have fewer than 100 employees and are battling a globally competitive environment while facing snowballing retirements and a shortage of skilled workers. But they’re not alone; the challenges faced by small and medium-sized enterprises are shared by their larger industrial siblings. The response to the challenge might best be shared as well: industrial robots. 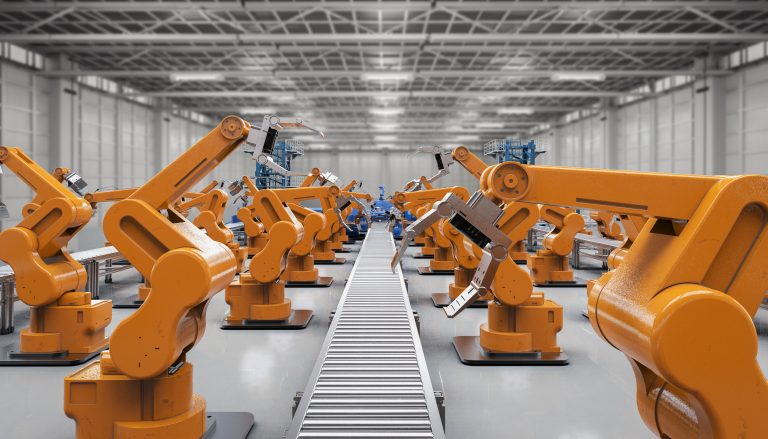 The heritage and application of industrial robots is deep: robots, defined by parameters including number of axes, payload, speed, accuracy, and repeatability, were conceived and built as far back as the 1930s, with the first patents awarded in 1961.

Adoption accelerated. Big manufacturers, with hundreds of repetitive jobs that were considered “dirty, dull, and dangerous,” jumped at the opportunity to increase productivity without compromising worker health and safety. Add in the programmed and planned precision and accuracy? Robotics was bound to flourish. Large manufacturers, able to afford the high prices of early robots, invested in robotics, gaining the advantages of reliability, repeatability, precision, and safety in process and production.

That was then. Today, robotics and automation offer enterprises the same benefit, and at a much more accessible level. A Manufacturing Institute study illustrates this. In 2005, 69% of all industrial robot orders in North America were made by automotive OEMs and automotive components companies. By 2014, that number had dropped to 56%. Potential applications of automation and robotics are limitless—and now they are even able to work alongside workers without the large safety cages of early robots.

There is an cumulative effect in the return on investment from robotics. Much like the mechanization of agriculture or the development of the assembly line, the investments of early adopters ultimately make products and technology more accessible and more affordable to consumers. The technologies implemented by a few automotive-related manufacturers are now accessible, available and applicable to every industry and company.

According to the Manufacturing Institute study, North American industrial robot orders are now being made at increasing rates by food/beverage, consumer goods, biomedical, and other industries. And it’s only going to grow, with 59% of all manufacturers surveyed by the study currently employing industrial robots.

Claude Dinsmoor, general manager, General Industry and Automotive Segment for FANUC America Corp., noted that “Early adopters paved the way and demonstrated the capability and potential of robotics. The smaller manufacturer now has access to the same technology—refined, simpler, and easier to integrate.”

FANUC has manufactured hundreds of thousands of industrial robots throughout its history. Those robots are being employed by enterprises of all sizes. “The investment doesn’t have to be total or comprehensive,” said Dinsmoor. “Many sales involve one or two robots at a time. Enterprises can add and expand their capability as demand and growth dictate.”

Indeed, manufacturers in all segments are asking for and applying the technology. Smaller enterprises find that today’s robots are flexible, adaptable, and easily networked.

Accessibility and capability are driving the industrial robot market ever higher, and growth appears boundless: one researcher expects the market to be worth more than $70 billion by 2023. With that growth comes increased opportunity for any manufacturer.

Collaborative robots are predicted to drive much of the market’s growth in coming years. Smaller, nimble, and with increasing numbers of sensors, collaborative robots are anticipated to account for 34% of industrial robot sales by 2025. The required investment has decreased as robots increase their market share: collaborative units can range in price from $25,000 to $45,000—a far cry from the $521,000 in today’s dollars it cost to produce the first industrial robot in 1961.

Industrial robots are more economically accessible than ever before, with proven advantages and capabilities for any sized manufacturer. The door is open and your opportunity awaits.