SME recently talked to John Sitilides, geopolitical strategist at Trilogy Advisors LLC, to discuss geopolitical risk and global strategies in the decade ahead. He chairs the U.S. State Department’s Advanced Area Studies Program for Southeast Europe (under U.S. government contract) at the Foreign Service Institute. He has testified before Congress and is a regular national security commentator on leading broadcast, print and digital media. Sitilides is a featured presenter at this year’s AeroDef Manufacturing event.

AeroDef Manufacturing® is an aerospace manufacturing and defense manufacturing conference and exposition, showcasing the industry’s most advanced technologies. Speakers and presenters from the highest levels of government and industry will share their vision of the potential of technology, collaboration and public policy to transform manufacturing. Over the next few weeks, SME.org will share insights from some of the featured AeroDef speakers. To hear their full presentations, meet them face to face, and to experience the pairing of high-concept, integrated solutions with real-world applications, we invite you to attend AeroDef Manufacturing April 29-May 2 in Long Beach, California. 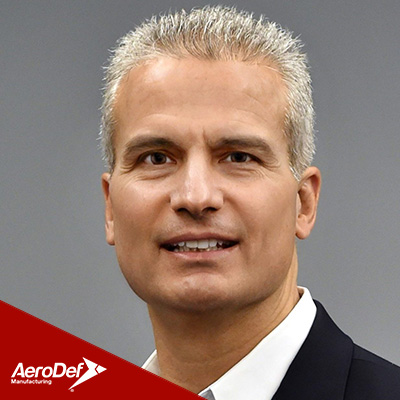 What’s the first step to better engaging the global relations the aerospace and defense manufacturing industry has with trade, diplomatic and military, based on the current and projected geopolitical agendas?

Educating the public with wide-eyed clarity about the relentless importance of United States national security and the need for constant American leadership to reassure committed allies, persuade skeptical partners and deter enemies around the world. This is critical to achieving the political will and budgetary support, against the backdrop of growing entitlement spending and diminishing discretionary and military spending, to properly finance the defense capability the United States and its allies require to protect their political systems and the global economy which provides the prosperity of our respective societies.

Given your unique insight, what would you say is the biggest challenge facing the aerospace and defense manufacturing industry in the next ten years?

At the conceptual level, it is the lack of strategic thinking at most levels of the U.S. national security establishment, combined with the unwillingness to be forthright about our expectations from allies and partners, as well as the intentions of our foes.

At the operational level, it is the ascendance of political leaders in Washington, D.C., that ideologically oppose the advancement of U.S. power projection and defense capabilities, in favor of social expenditures. Given the growing geopolitical risk forces that have emerged in just the past five years globally, this is the least propitious moment for federal taxpayers to be paying for better and fewer guns under the misguided belief that we can afford to ignore or excuse the most malignant elements of global disorder that openly threaten to undermine the united states and its western alliances.

At the technological level, the challenges will be enormous, given the difficulty in anticipating within any research and development framework which technological advances will be achievable, deployable and executable. In addition, the traditional U.S. technological lead of prior decades is being matched, and may be rapidly overtaken, by the colossal scale of China’s investments not only into artificial intelligence, but across every cutting-edge industrial sector, especially those with immediate civilian-military dual-use application.

You’ve said before in a TED Talk that peace is not the norm, war is. What’s the key to protecting a system of order with our allies and adversaries? What would you say is the biggest misunderstanding that has undermined potential alliances that risk trends feed into?

Historically, peace is indeed an aberration. Warfare, combined with poverty and the daily struggle for sheer survival, has been the default condition for mankind for thousands of years, until just about 200 years ago. Mankind has been utterly transformed by the political freedom movements in Great Britain and the U.S. in the 17th and 18th centuries, powered by the industrial revolution, driven by fossil fuels, and propelled by the technological breakthroughs of the previous half-century.

It is critical that we not take for granted the fragility of what is special to the way of life and standard of living that the U.S. enjoys and shares with allies. They also need to understand that their freedom and prosperity are based upon the security provided by the U.S. in an increasingly chaotic global environment, disrupted by the rise of aggressive and hostile powers in nearly every strategic theater of the world. Allies can certainly disagree over strategies, policies and tactics, but they must minimize their differences over values and objectives if the alliances are to endure.

If allies cannot agree on their adversaries, and they forget the values and objectives that first bound them together, they are doomed to failure. Determined adversaries and foes actively seek to undermine our political and economic systems, following Sun Tzu’s dictum that “to subdue the enemy without fighting is the acme of skill.” Thanks to the aerospace and defense manufacturing industry, fighting the U.S. today would bring certain defeat for any military in the world. But defeating the U.S. without engaging its military remains the goal of our most powerful adversaries.

Where do you see the future of international security markets heading in the next five years?

International security markets are robust and growing. The U.S. and most of our global allies grew complacent in the quarter century since the collapse of the Soviet Union and the end of the Cold War. But history did not end. Rather, former empires resurged as malign modern powers. China, Russia and Iran seek to upend and replace the free and open rules-based order that has provided the foundation for relative peace and prosperity since the early 1990s. North Korea tested its first nuclear weapon in 2006. Russia invaded Georgia in 2008. Iran reinforced the Assad regime in 2012. China launched its most aggressive global leadership drive in 2013, including actively seeking to neutralize the U.S. military in the western Pacific, and ultimately the Indian Ocean.

We have entered the most complex and dangerous global and geopolitical landscape in many decades, perhaps since the end of the second World War. The re-emergence of great power competition on the world stage, merged with the astonishing technological leaps not only of prior years but of mind-boggling advances in the years to come, ensures that international security markets will need to address steady and more intensive demand beyond the horizon.

What’s the most important takeaway you will dive into during your session?

The stable post-Cold War era of a free and open rules-based international trading system is no more. Nearly every major geopolitical dynamic at the strategic level, involving China, Russia, Iran and North Korea, as well as the rise of India and the disquiet of Europe, is interconnected directly or indirectly. It is a grave error to isolate these global and regional developments. Mounting malign political, economic, and military power against the U.S., our allies and our global power projection capability will be increasingly deployed against us by determined adversaries. The aerospace and defense manufacturing industry must help lead in the era of global geopolitical volatility, with national politics, regional stability and the global order on the edge for the foreseeable future.

Hear more from John Sitilides during his presentation, “Geopolitical Risk and Global Strategies: The Decade Ahead,” at AeroDef on Tuesday, April 30, at 1:00 PM in The Deck at the SME Zone. Enter promo code JSITILIDES at registration to claim a free exhibit hall pass.