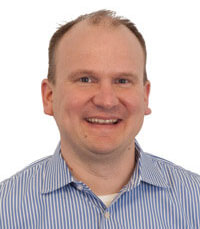 Chad Schron is the senior director for Tooling U-SME and the co-founder of its online training. Schron grew up in manufacturing. He started his career working in his grandfather’s machine shop, Jergens Inc., and attended his first IMTS show before he graduated from high school. Known for his innovation using technology for optimizing learning, Schron developed the idea for an online manufacturing training school while working at Jergens to combat the manufacturing skills shortage. Today, Schron leads the talented Sales, Learning Services, Client Services, Technology, Content, and Operations teams for Tooling U-SME and developing the next generation of learning using virtual reality. Schron graduated in 1999 from West Virginia University with a bachelor’s degree in industrial engineering. He was named one of Cleveland’s “Top 40 under 40” by Crain’s Cleveland Business in 2008, and in 2003 & 2004 was named an Ernst & Young Entrepreneur of the Year finalist.