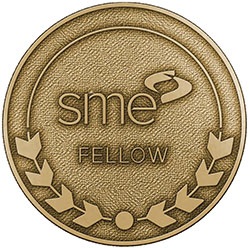 Since 1986, the SME College of Fellows has honored those members who have made outstanding contributions to the social, technological and educational aspects of the manufacturing profession. This is a highly prestigious honor that can only be earned through years (20 or more) of dedication and service.

An SME College of Fellows nominee/nomination must:

Please note: This award is based on contributions to the manufacturing engineering profession and is not an SME service award.

To submit a nomination:

Submit all nominations no later than Dec. 1 of each year to:

SME Elects 6 to Its College of Fellows

2019 SME Fellow Andrew M. “Andy” Christensen's, FSME, career has focused on developing and expanding the medical applications of 3D printing. As an undergraduate, Christensen studied business at the University of Colorado at Denver. His first introduction to 3D printing was through the stereolithography process in 1993, shortly thereafter beginning to work with surgeons in facilitating better surgical planning through use of these technologies. All six of the 2019 SME Fellows were installed during SME's Awards & Installation Gala in Chicago on Nov. 8.
2019 Award Winners Other SME Fellows