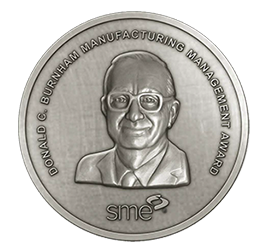 The Donald C. Burnham Manufacturing Management Award is part of the International Honor Awards, and recognizes exceptional success in the integration of the infrastructure and processes of manufacturing through innovative use of human, technical and financial resources.

Send completed nomination form(s) and recommendation letters no later than Aug. 1 of each year to:

Lisa Strama is president and CEO of The National Center for Manufacturing Sciences, a leader in establishing and executing programs for increasing U.S. manufacturing global competitiveness through the acceleration of technology transfer.
2022 International Honor Awards Recipients